I have heard that the castings for the triple expansion marine engine will be arriving in the next week or so. That is good news after waiting since the order was placed in January.
In the meantime, I have bought some castings and partly made components for a Burrell Traction Engine. It is 1.5″ scale, and I obtained some 1.5″ plans from EJ Winter for the Burrell. Unfortunately, one mans’ 1.5″ is anothers’ 1.45″ and the plans are not exactly correct for the castings! What would have been a difficult build, has turned into a very difficult build. So I have put it aside and will tackle it gradually. The plans will be some use, but as well as the difference in scale, there are differences in the designs. So I will have to make it up as I go, to a considerable extent.
My metal working club has promoted a competition for 2014, and it appeared to be a fairly simple build, so that is what I am currently machining. See the progress in the photos below. It is a Stirling heat engine, designed by J Ridders. You can see one working on the Ridders web site http://heetgasmodelbouw.ridders.nu 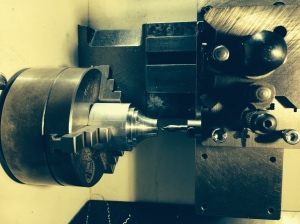 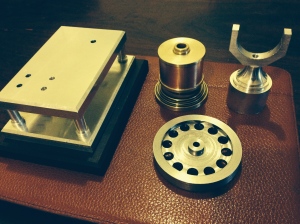 Components made so far 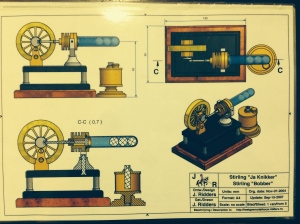