I mean the sort with wings.

Before seeing vultures in Botswana, I had a Hollywood inspired idea of vultures as the bad guys of the air, hovering and waiting for the good guy to die in the desert.  Ugly, with their featherless head and neck.

In fact, vultures do hang around, waiting for animals to die, or waiting their turn to feast on a carcass.  But in the air, they look a lot like eagles or other raptors.  They are big, with wing spans up to 2 meters, and soar magnificently.

Here are some photos of vultures, which I saw in Botswana. 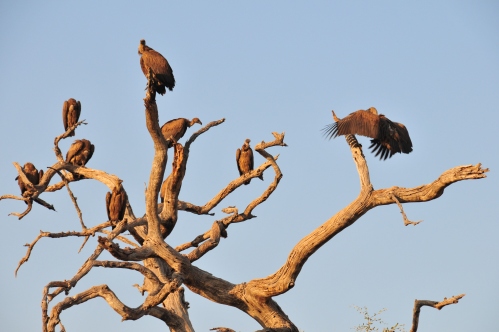 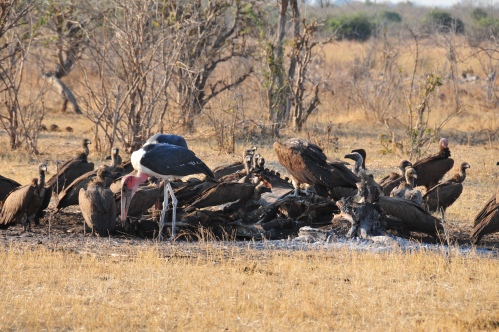 Note the central cluster of young vultures looking at us. probably wondering if we might be dessert. 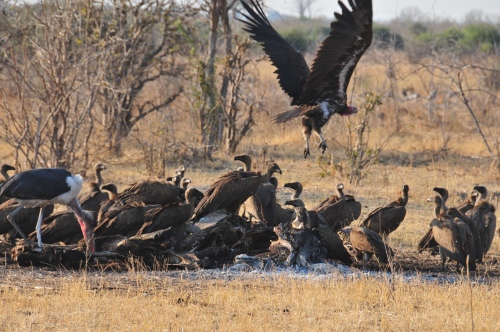 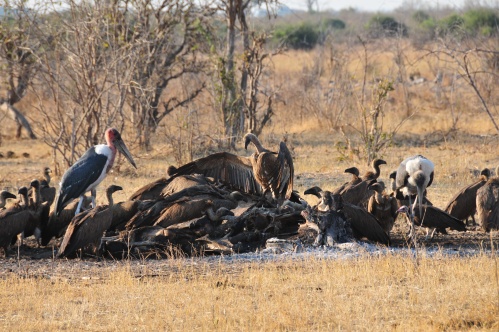 The guide told us that the elephant had been dead for about one week, of natural causes. There is no hunting in Botswana.
We smelled it long before we could see it. The stench was huge.    Then we could see a large moving mound.  As we got closer the movement resolved into dozens are large birds, mostly vultures, but some stork types also.   There were constant landings and take offs of the vultures, and they were truly spectacular.

After manually threading the 56 cylinder head holes, (having CNC drilled the holes), I thought that I should attempt to do some CNC tapping.

The tapping built-in canned cycles in my mill allow only for single pass tapping, and a single backing out of the tap.  No backing off every turn or two to break the chips, as we would all do with manual tapping.  And my only method for holding the tap was in an ordinary drilling chuck;  not ideal, and I wondered what would happen if there should be any slippage of the tap in the chuck.  I was to find out all too soon.

16 M3 holes threaded in what seemed like a minute or two.

Next I tried a 6mm tapped hole through a solid chunk of brass.  This time, I did not lock the quill.  The reason?  On tapping the 3mm plate, at the end of the tapping stroke, as the chuck decelerated and stopped, I noticed that it slightly pulled the workpiece upwards.  As the tap was backed out (automatically, after 1 second dwell), the upward pulling ceased.  I do not know the reason for this phenomenon but I suspect that the CNC does not perfectly match the RPM’s and the feed rate during the deceleration as the tapping stroke is finishing.  I will read my CNC books on tapping tonight to see whether there is a known explanation for this observation. 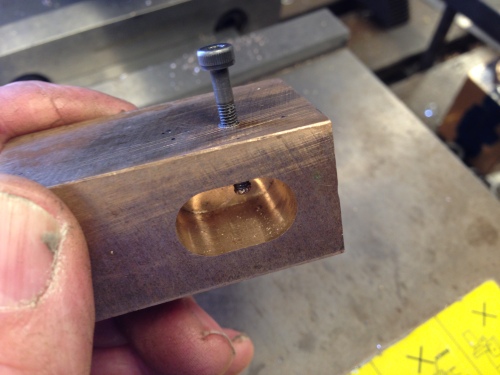 No problems at all with this one.

Then I tried tapping 12mm thick steel bar with a 3/8″ x 16tpi tap.  I used plenty of tapping lubricant.  The calculation for spindle RPM’S and feed rate was more complicated, and I am not totally sure that I got the rates correct.  Because it was a total failure.   The  tap screeched, the mill stopped and gave an error message.  I am sure that the tap slipped in the chuck, totally rendering the calculations to be out.  Anyway, that rather shook my confidence, so until I have worked this process out, I will not be tapping thick steel automatically in my mill.  But brass, no problems.

I have used a Tapmatic attachment in the mill, using the CNC for auto positioning, and that worked fine.  But it does take a few minutes to set up.  At least the Tapmatic allows for some reversing every few turns.