THE CONDENSER- not so easy afterall.

I had deferred making the steam passages (in the triple expansion steam engine), and moved sideways to an “easier” task, which was making the condenser unit.

It consists of a gunmetal box, with walls ~4mm thick, ends of 3mm brass, and 28 copper tubes soldered to the brass plates.  Plus end caps which required some milling and drilling ( see yesterday’s post).

I could not find my soft solder, so I used silver solder.  That was mistake 1. The heat source is an oxy actylene torch, and to keep the heat down I used a small tip. Mistake 2.  The end plates were first soldered (that is soddered if you live across the Pacific ocean) to the main body, and that seemed OK.

Then I fluxed the holes in the end plates, and fluxed the copper  tubes and positioned them into the end plates (mistake 3).  In view of what happened, I suspect that much of the flux was wiped off while pushing the tubes into position. 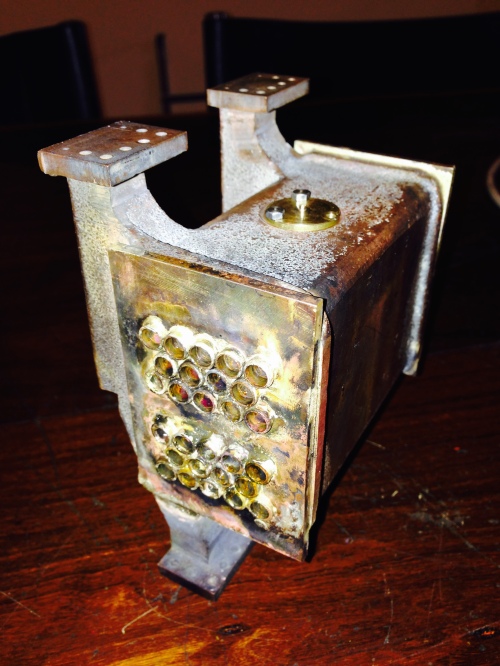 The water tubes silver soldered to the end plate. The first end soldered, and it had multiple leaks… 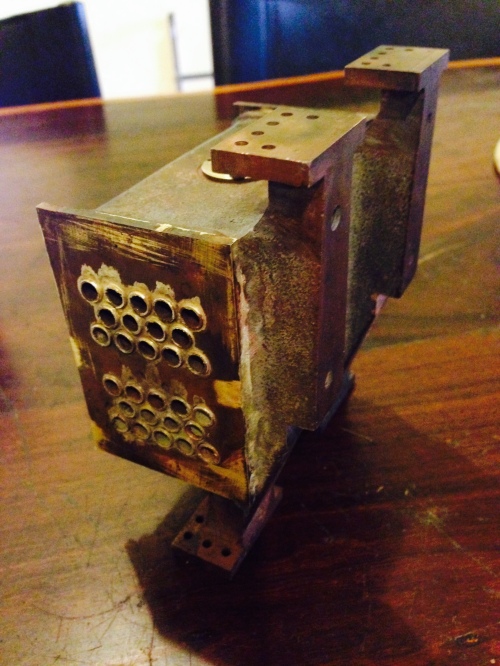 The second end silver soldered, and it was perfect! No leaks, looked neat.

So, one end soldered without a hitch, and the other needs to be re-done.  Why?

1. The copper tubes protruded further on the bad end, and it was more difficult to position the soldering rod in the in-between joins.

3. It is likely that the flux was retained more on the good end.

So I am maintaining a well exercised tradition of learning from my mistakes.  I am sure that I have made mistakes 2 and 3 only a few times before.

So how to fix the leaky end??

1. Apply more flux and solder to the leaky bits?  Tried that.  Didn’t work.

2. Expand the copper tube ends with a tapered drift?  Tried that, and it helped, but still not enough.

3. Disassemble the leaky end by melting the silver solder and re-doing it?  After trying fix 2, I think that I have prevented this option.

4. Use soft solder to patch the leaks?  Not yet tried, but that is next.

If fix 4 does not work, I plan to remove and remake the tubes and end plates and re-solder the entire unit.

4 Comments to “THE CONDENSER- not so easy afterall.”