A few posts ago I posted some photos of the Koffiekop Stirling Engine, the top plate of which I had decorated with “engine turning”.  I had borrowed the engine turning tool and it worked well.  But I really wanted the circles to be bigger than the 5mm diameter which the Brownells kit produced.

Today I experimented with disks punched out of metal polishing material, glued to the end of same diameter dowel.  (1/2″ = 12.7mm diameter).    I used Super Glue, and no problems with adhesion.

The dowel was attached to a chuck in a drill press.  Running at about 200-300 rpm, and pressing firmly.  No extra cutting compound ( I imagine that these metal polishing pads already have an imbedded cutting compound).  If I was using washing up Scothbrite  type material, I would expect to have to add a cutting compound.

The steel I was testing had surface rust.

Very happy with the result.  Next time I will use CNC positioning to pattern the circles, and overlap the circles so the crappy rusty steel disappears.

I understand that if engine turned surfaces are oiled, they are relatively rust resistant.  Presumably some oil remains in the microscopic grooves. 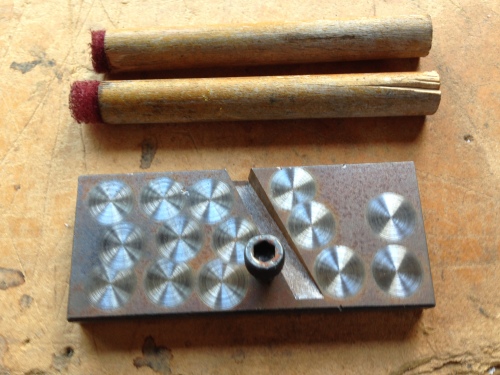 The top tool shows the tool after considerable use. It is a bit worn, but the thinning is mainly compression of the material. Compared with an unused tool below. And the surface rusted steel, which has had the tool applied in a semi random pattern, at the bottom of the snap.   (it is a home made tangential lathe tool sharpening jig).