Making Springs and Other Stuff

SWMBO has always considered that having a winch on a vehicle is a bit of a wank, but I have used it many times getting out of bogs, getting other people out of bogs more often, moving machinery, pulling down/moving trees, straining fences etc etc.   SWMBO was intending to replace these concrete steps, because they were crooked with respect to the house which she is fixing up.  I said that I could straighten them.

This is after straightening.  I jackhammered the path slab, lifted the floor slab with the 4WD high lift jack, and pulled the steps with the Landcruiser winch.  Easy as.  Took 30 minutes.  SWMBO was delighted!

And I used my new spring tool.  Brilliant!  Recorded on videos.  Again, apologies for my lousy video technique.  I had forgotten to bring the spring making instructions, so it was all trial and error. 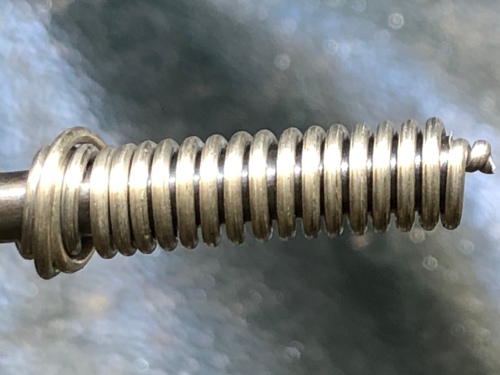 This was my first effort.  Aluminium wire, just to try the tool.  As you can see, there were multiple errors.   Feed rate too slow for the RPM, forgot to enter a stop command at the end, feed rate much too slow at the beginning on the left.

So I started with aluminium, making many mistakes, sometimes repeatedly, but eventually learning.  Progressed to soft iron wire, and eventually to stainless steel spring wire.

Following is a series of pics and videos.

Initially I secured the end of the wire by catching it in the collet, but quickly replaced that method, and drilled a 1.5mm hole in the mandrel.  Again, I forgot to issue a stop command in time.   The starting coils were hand wound by manually turning the spindle and jogging the feed.  If I was making multiples of the same size spring that would be simple to program on the CNC. 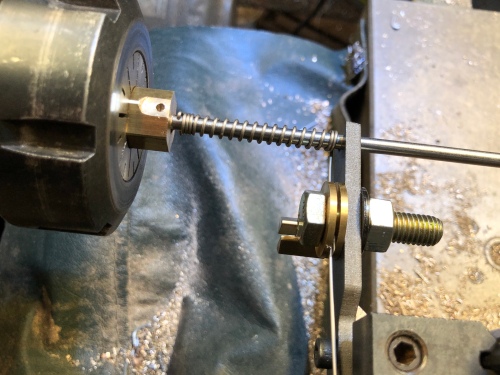 Ah!  Getting the hang of this!  That one looks good!

In the next video, a good spring is made.  The mandrel wobble is occurring because I had bent the mandrel, when the steady was not hard enough against it.  Bend straightened afterwards.

And the safety valve with its new spring…

And re-installing the safety valve lever was almost comic..

How did you like the videos?  I suppose that I should have stitched them together into one long video.  Maybe I will do that later for YouTube.   And to edit out all of the errors.

Later today I will post another video, this time a longer one, a tour of the Trevithick engine.

Well, what a nice day!

Wednesday is always a good day.  That is when our model engineering group has its weekly meetings.  Mostly a 2-3 hour informal gathering around a large table, chatting about current projects, new tools, the weather, rarely politics or religion.  Coffee.   And once each month a more formal evening meeting, involving discussion of club business, “models on the table” and usually a guest speaker.   Today was the informal 2-3 hour chat variety.

I used the opportunity to ask about methods of making a rectangularish water tank for the Trevithick dredger engine, riveting, folding brass, caulking with solder, etc etc.    And Stuart T, knowing that I had to make a stainless steel compression spring for the safety valve of the Trevithick, brought in his tools for making springs.

This is one of the tools.  It was designed by Dwight Giles, and made by Stuart.

The tool is mounted in the lathe tool post.  The V supports the chuck mounted mandrel, and the brass washers apply drag to the spring wire.  The lathe threading gears supply the pitch to the spring.  Looks excellent, and I was hoping that Stuart was intending to lend it to me.  Otherwise I would make one of these tools.   But why were there two of the tools?   “Oh, one is for you!  I was making one for myself, and it was just as easy to make two.”

Not the first time have I been the recipient of Stuart’s generosity.  When I make the spring (soon) I will take some pics, and post them here.

Later in the meeting, Swen Pettig, recently returned from a fabulous trip to Scandinavia and UK, called for shoosh, and stood up to make a presentation.  Some people knew what was coming.  I didn’t.  But in “recognition for writing about his model making” (now my ears pricked up), Swen had picked up an item in the UK which he thought I might find interesting.  Knowing of my current interest, some might say obsession, with Richard Trevithick, he had looked for and found the following item. 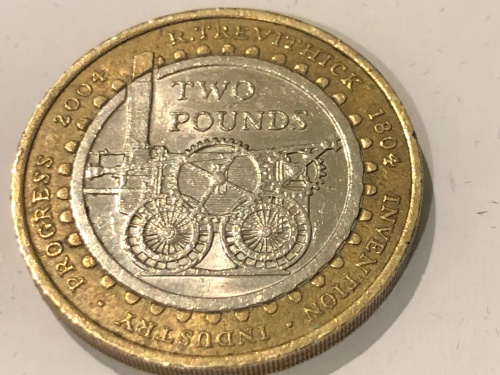 A Two pound coin.  I did not get the significance, until I looked more closely.  Holy Shit!  That is a Trevithick engine on the coin.  The Pen-y-Darren railway engine if I am not mistaken.  Made in 1804.  And using many recognisable features which are in my slightly later dredger engine.  The coin was minted in 2004, 200 years later.  Wow!!

I did not even know about the coin until today.  But I am honoured and very grateful for this lovely gift and thought, Swen.

One wag suggested that I should make another gas knob for the engine, and mount the coin in the knob. (thankyou for the suggestion, President Brendan.  I will do no such thing).  It will be a  valued possession.

Incidentally, the reverse of the coin has an image of the Head of State of Australia.