The Robert the Bruce approach to turning problems.

Robert the Bruce was watching a spider making a web in the cave they were sharing, so the story goes.  The spider tried 6 times to make a difficult connection, and on the 7th attempt, it succeeded.  Robert, who had tried many times to become king of the Scots, was inspired to try yet again, and he did indeed become King Robert 1 of Scotland, eventually.

I thought of Robert more than once recently, when I was making an ER40 collet chuck for my CNC lathe.  The particular  collet chuck involved making a 2.25″ x 8tpi internal thread, a 50mm x 1.5mm external thread, and cutting an 8 degree internal taper.   Not too complicated you say.  I agree, but for the chuck to be useful, each step had to be extremely accurate.

I made 4 successive collet chucks until one was adequately accurate. 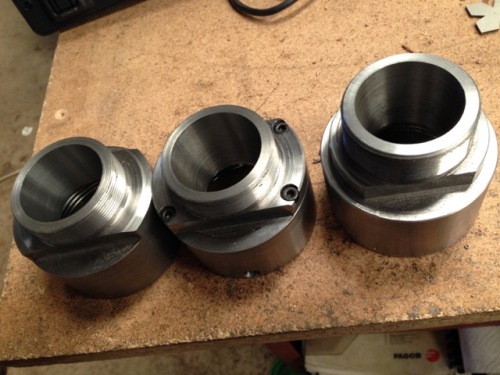 Chuck 1 actually went very well.   Nice tight spindle thread, taper good, and external thread just right.  But the chuck did not quite seat firmly.  Could it be that the spindle thread (the internal one) was not quite long enough?   So I cut a deep distal groove.    Wound out the carriage.   Oh shit!   Forgot to clear the spindle thread.   Totally destroyed it.   The chuck actually fitted the spindle quite nicely, but with only 10% of the thread remaining, it was useless.

Chuck 2 was made in 2 pieces, on suggestion from Stuart T.  The idea being that if there was any inaccuracy in the lateral runout, the piece with the taper could be adjusted.  OK.   Sounded sensible.  Again all went well, but the spindle thread was not correct.  For some reason the thread cutter seemed to make a new path about half way through making the thread.   So the spindle thread was thinned  excessively.   But still tight.   So I made the tapered half, and joined it all together.  Fitted it to the lathe and measured the runout and taper.  All good.  Less than 0.01mm runout and perfectly parallel to 100mm from the chuck face.   But.   The next day I removed the chuck, replaced it, and did the runout measurements again.  I did not need a gauge.  I could see the wobble.  Chucked the chuck  into the rubbish bin.  That thinnned out spindle thread was hopeless.   But what caused the problem?  The thread was CNC cut, and it should have been perfect.

So chuck 3.   One piece again.    All seemed to go well, but again the big spindle thread was wrong.    Again there seemed to be 2 thread paths.

Then the penny dropped.   The spider made the web connection.   Robert got the throne and John saw the light.

The tool post had moved slightly during the threading!  It had twisted a little, as a result of the T piece in the carriage slipping.  F**K    F**K  F**K!!!

I replaced the T piece grub screws with more solid cap screws, and really tightened them.  Then made another chuck.    I must point out that each chuck was about 6-8 hours of machining, normally a very pleasant time.  But by this time, I felt like that  bloody spider in the cave. 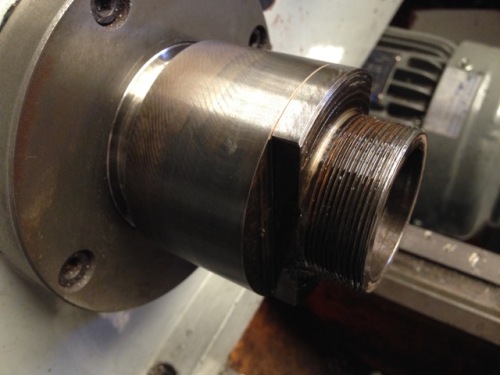 One advantage of making 4 chucks is that each one was made faster, and with more confidence.   This one was made in about 5-6 hours, including painting with selenium oxide to give it a black appearance.

It has a runout at the chuck face of 0 – 0.01mm (which might have been due to inaccuracy in the rod which was being measured), and a taper of 0.02mm at 50mm from the chuck face.  It feels nice and tight when being screwed on.   OK,  Success.   Eventually.

Next job, the throne of Scotland.

But obviously that slipping top slide on the CNC lathe has to follow chucks 1,2 and 3 into the rubbish bin.   It will be replaced by a fixed, immoveable tool post.

My Boxford TCL125 CNC lathe was missing steps in the cross slide, with resulting inaccurate work.  Obvious causes, like cutters not sharp, or gibs too tight were excluded.  Changes in the stepper motor settings maybe helped a bit, but not enough.

Stuart T suggested replacing the stepper motor, since the machine is a 1985 model, and the steppers look original, and therefore the 32 year old stepper permanent magnets are probably not as strong as they were originally.

We had changed the electronic controls in the lathe 3 or 4 years ago, so it would work with a Windows PC, and Mach3.  Mostly I use “Easylathe” for generating the G codes.

Stuart had a spare stepper motor in his junk box, and it was the correct size (Nema 23), but more powerful than original.  So I swapped it, and missing steps disappeared.  Hooray!  A minor problem was that Stuart’s stepper had shafts at both ends, and I was not comfortable about cutting off the unwanted shaft end, and I had decided to change the Z axis stepper also , so I ordered some new stepper motors.

A carton of 3 motors arrived a few days after placing the order.  They are made in China, and are nicely finished.  Each new motor had 4 wires, whereas the originals had 8 wires each, but reference to the wiring diagrams quickly determined the connections.  Total cost for the 3 motors was $AUD90, including postage, and now I have a spare.

A big advantage of the NEMA mounting system is that the motor mounting dimensions are fixed, so swapping motors is simple.  More powerful stepper motors are longer, but the dimensions are all available online, and can be checked before ordering. 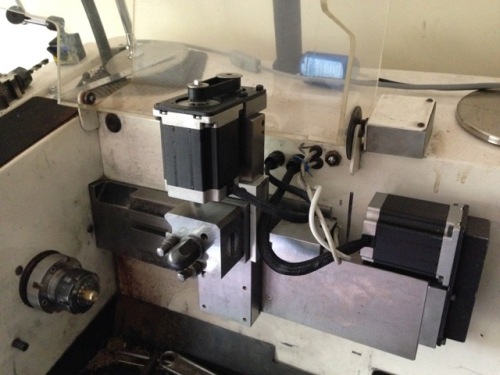 The black and silver new stepper motors fitted to the Boxford TCL125.  One cover waiting to be reinstalled. 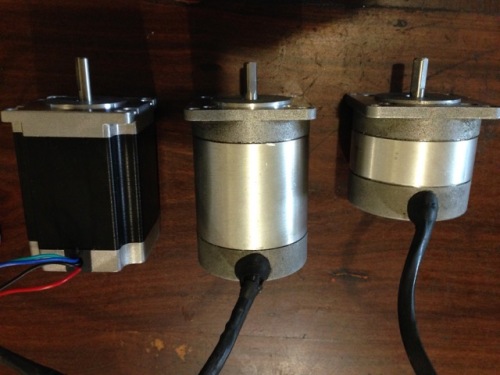 The old steppers on the right.

A simple CNC turning test worked well, so I am hopeful that this problem is fixed.