Model Engineers have Other Interesting Hobbies.

When I visited York, UK recently, I met up with a reader of the blog, Jennifer Edwards.  Jenny had set aside 2 days, and we visited the Kelham Island industrial museum in Sheffield, and the York Railway Museum, both of which have featured in recent posts, and both of which were wonderful.  It was made much more enjoyable by having a kindred spirit as company.  And fortunately both of these sites were new to Jenny also, and equally enjoyed by her I believe. 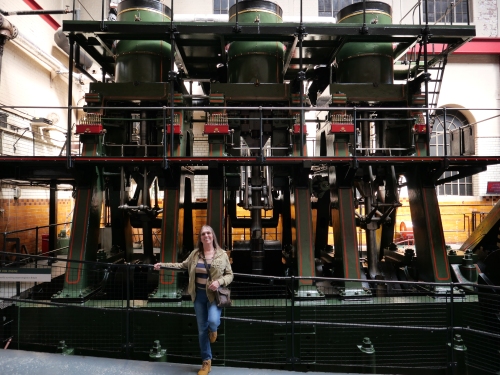 This post is about one of Jenny’s many interests.   Metal detecting.

I am not sure what attracted Jenny to this activity, but she joined a local detecting club, and spent many days checking English fields with the club, searching for interesting metal objects.   With fairly limited success.

Then one day she had the idea of checking a local rugby pitch.  Surprisingly, the rugby club agreed, with some stipulations I am sure, about replacing turf, minimal disturbance etc.

Within a short time, Jenny was getting positive signals, then carefully cutting out a square of turf, then digging out the ground, in most cases no deeper than about 150-200mm (6-8″).  And finding coins, rings,  (gold, platinum, some diamond), musket balls and other interesting objects.  Obviously, the field had never been previously scanned.  And research later revealed that the area had been the site of a village fairground.   And before that a walled area for defence against sea raiders.  Very old apparently, because some of the coins were Roman.  Others were of later vintage, medieval, Victorian etc.  About 200-300 objects of interest were found by Jenny.

The find was unusual, and was written up in a metal detecting magazine. (The Searcher, September 2018).

Jenny showed me some of the oldest coins, and I was flabbergasted when she said that I should keep one, as a memento.  I did say that I couldn’t possibly… but I confess that holding something so old, much less being given it, was overwhelming.  I accepted.

Here are some photos of the coin.  It is a silver denarius, minted in Rome in 137BCE.  i.e. it is 2156 years old.  Minted in the Republican era, before Julius Caesar, before Christ.

The image is of Apollo.  “Tampil” is the family name of the minter.

The reverse shows Apollo on a 4 horse chariot, holding a laurel branch in one hand and a bow and arrow in the other.  The words “Roma”  and “Baebilius” (part of the minter’s name) are clear.

The coin is small (about the size of an AUD 5 cent piece), silver, and the images are amazingly clear.  The Tampilius family was well known, having provided senior officers for the Roman infantry, and at least one consul of Rome.    The right to mint coins was granted to some high status private individuals in ancient Rome.  The value of the coin was roughly equivalent to its value in the silver it contained.

It says heaps about Jenny’s  generosity that she gave the gold and platinum rings to the rugby club.

3 Comments to “Model Engineers have Other Interesting Hobbies.”