No hesitation about this one.  It is magnificent.  A big, expensive, superb book.  Very detailed.  Lots of photographs, maps, diagrams, plans, tables.  And written by people who really know their subject.  All naval architects.  Very readable, but probably not in one session.  In fact, I have read it, selecting sections almost at random, then finding it very difficult to put down.

Here is my official review.

This superb book, IMO, is destined to become THE authoritative account of conception, design, building, brief naval history and destruction of one of the most famous ships ever.  Written by expert naval architects, the 610 pages of double column text are illustrated by many original photographs, maps, and diagrams.

I suppose that some people will read it cover to cover, but I found myself being drawn initially into the design and building of the massive battleship.  In a later reading session, I read the incredibly moving accounts of the German survivors.  And in another session, the sinking of the Hood.   Then, not necessarily sequentially, the chapters leading to the discovery of Bismarck, the disabling of the rudders, and the final, fatal confrontation with the vengeful Royal Navy.

Recently we have been treated to magnificent Seaforth publications of books of plans of warships Helgoland, the Repulse and others.  I confess that I was slightly disappointed that similar detailed plans of the Bismarck were not included in this publication, but I understand that there are limits.  Perhaps a separate book?

Congratulations to the authors and publishers of this magnificent work, which I am delighted to add to my library.

Some pics of the book. 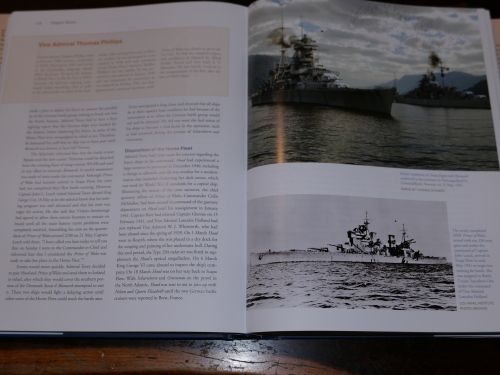 At £55 it IS expensive.  But in this case you get what you pay for.

One Comment to “Book Review. Battleship Bismarck. A Design and Operational History.”