It is said that you learn from your mistakes.

Actually, I think that you TRY to learn from your mistakes.  It makes you feel a bit less stupid when you make mistakes.  Or, at least, it puts a bit of worth into having made a mistake.

At the rate of my mistakes in recent days, I should be turning into an Einstein.  Somehow, I doubt that is happening.  I think that I will stick with my motto of avoiding making the same mistake more than 3 times in a row.

Yesterday, I was cutting gear teeth into the big gears which I had cast a few days earlier.  Due to the mistake of not allowing for shrinkage of the castings, the wheels were almost 1mm smaller diameter than planned. (#1.). That meant that the wheels would have 55 teeth, rather than the planned 56 teeth.  Not a big problem, just an annoyance.

Also, I had not cast a shaft in the gears, or any method of holding the castings for teeth cutting, (#2) so I had to drill a central bore, insert an 8mm shaft, and solder it in position.  I should have used steel for the shaft, but for some reason I chose brass. (#3.)

Then, I could not find my module 1 gear cutters.  The  cutters, I knew, because I had seen them recently, were in a small cardboard box.  I went to where they were usually stored, and they were not there.  OK.  I must have put them somewhere else.  Then spent 2-3 hours searching every shelf, drawer, bag, box, floor, machine…. you get the picture.  And could not find them.  So I searched my vehicle, the other shed, and could not find them.   Had I loaned them to someone else?  Surely I would remember that?  So I went and had a cup of coffee.   Hmm.  What next?  OK, start searching again, going over previously searched spots in case I had missed them.  So, first to the cupboard where they were usually stored.

And there they were.  Exactly where they should have been.  Well bugger me!  (#4).  There was a small upside to this long and frustrating search.  I had found a few other tools which I had not seen for quite a long time.

So then I commenced the gear cutting.  55 teeth into the bronze wheel.  The setting up of the CNC rotary table on the mill, attaching the cutter to the arbor, cutting teeth marks onto the circumference to check my calculation of the number of degrees per tooth (360/55 = 6.545454º….).  All going well.   Each tooth required a cut 2.66mm deep.  But I was a bit concerned about that 8mm brass shaft.  Would it bend under the pressure of the tooth cutting?

DISASTER!  (#4.). When I attached the cutter, I had carefully placed it on the arbor so that the securing nut would tighten, rather than loosen with the cutting process.  But I had got it wrong.  Totally wrong, and it loosened!   BAANG.  I hit the big red button.  The mill spindle stopped, but the now loose cutter was still spinning wildly.  What if it comes off while spinning like that?  Would it fly across my workshop, cutting whatever it hits? Like me?

When I bought a woodworking spindle moulder many decades ago, an uncle advised me to NOT use it.  He had seen a co-worker die, when a cutter flew off a spindle moulder, slicing into his abdomen.  I did use the new spindle moulder, but with great caution, and never had any problems.

Visions of the gear cutter slicing into my belly.

But, the cutter slowed, then stopped, to my relief.

A quick look at the workpiece was disheartening.

The brake drum attached to the gear was bent .  A spoke had a big gash.  The tooth which was the culprit for this disaster was gashed too deep.  and the shaft was bent to a crazy angle.

First thought.  “Bin it and start again”.   Steps to make another big gear.   1.  3D print a new PLA gear (with machining allowance this time, and include an oversize shaft).  2. Make a casting tree. 3. Mix and pour the investment. 4. Dry, burnoff, and bake the investment. 4. Melt the bronze and pour. 5. Machine the gear blank, cut new teeth.  2 days estimated, if all goes well.

No photos of the damaged gear.  Not in the mood.  But I did take a closer look.   I wonder if it can be repaired.  Maybe the distorted brake drum could be bent back into shape?  Or cut off totally, and silver solder on a new one? Fill the defects, and tidy up the damage.

I decided to call it a day.   But first I used a hammer on the damaged bronze gear brake drum.  Somewhat to my surprise, it went back into reasonable shape, without cracking.  So, a bit more tapping, and it looks quite good.  It will require a bit of filling and filing, and machining, but maybe it is resurrectable.

After a sleep, and fresh look, I relented and took a couple of photos. 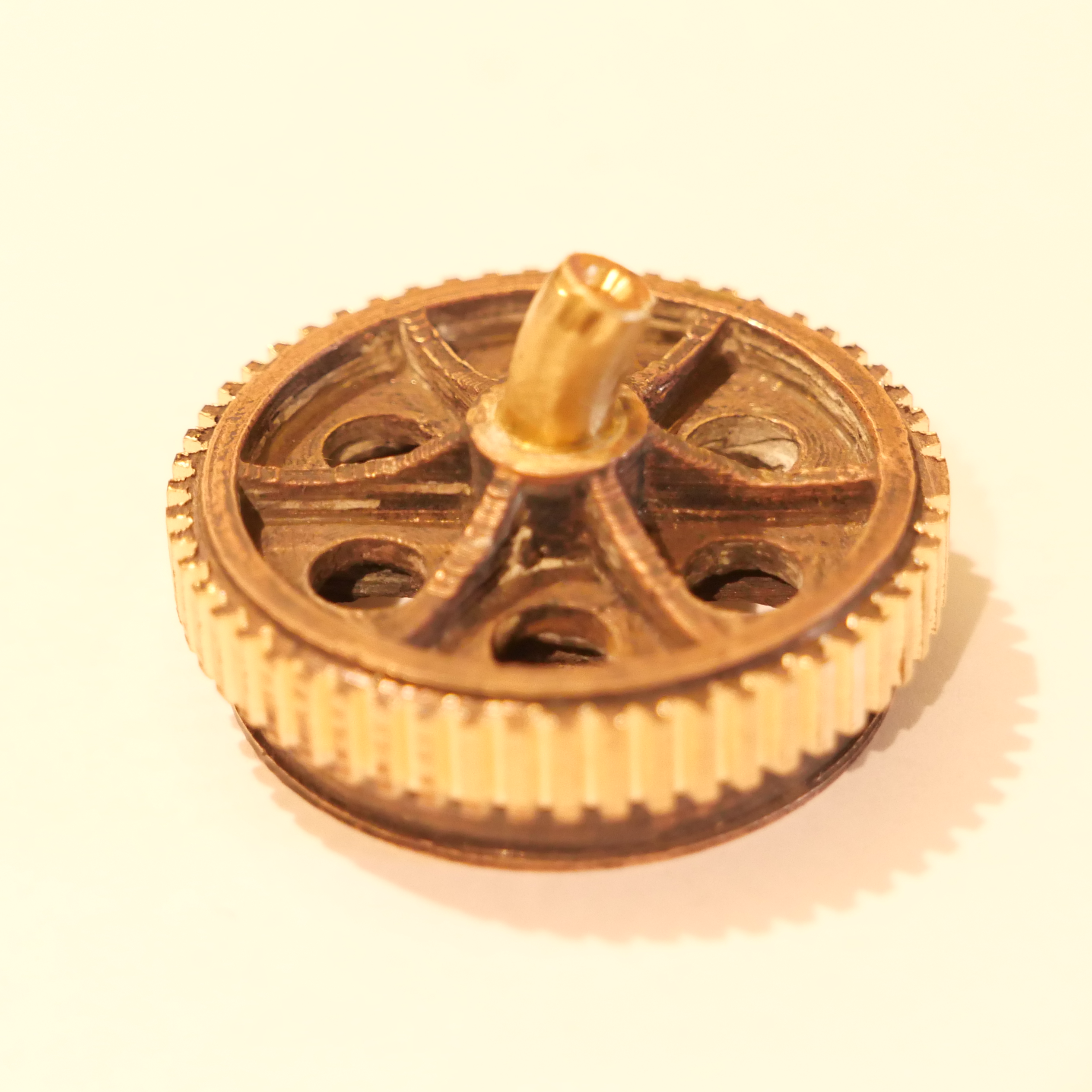 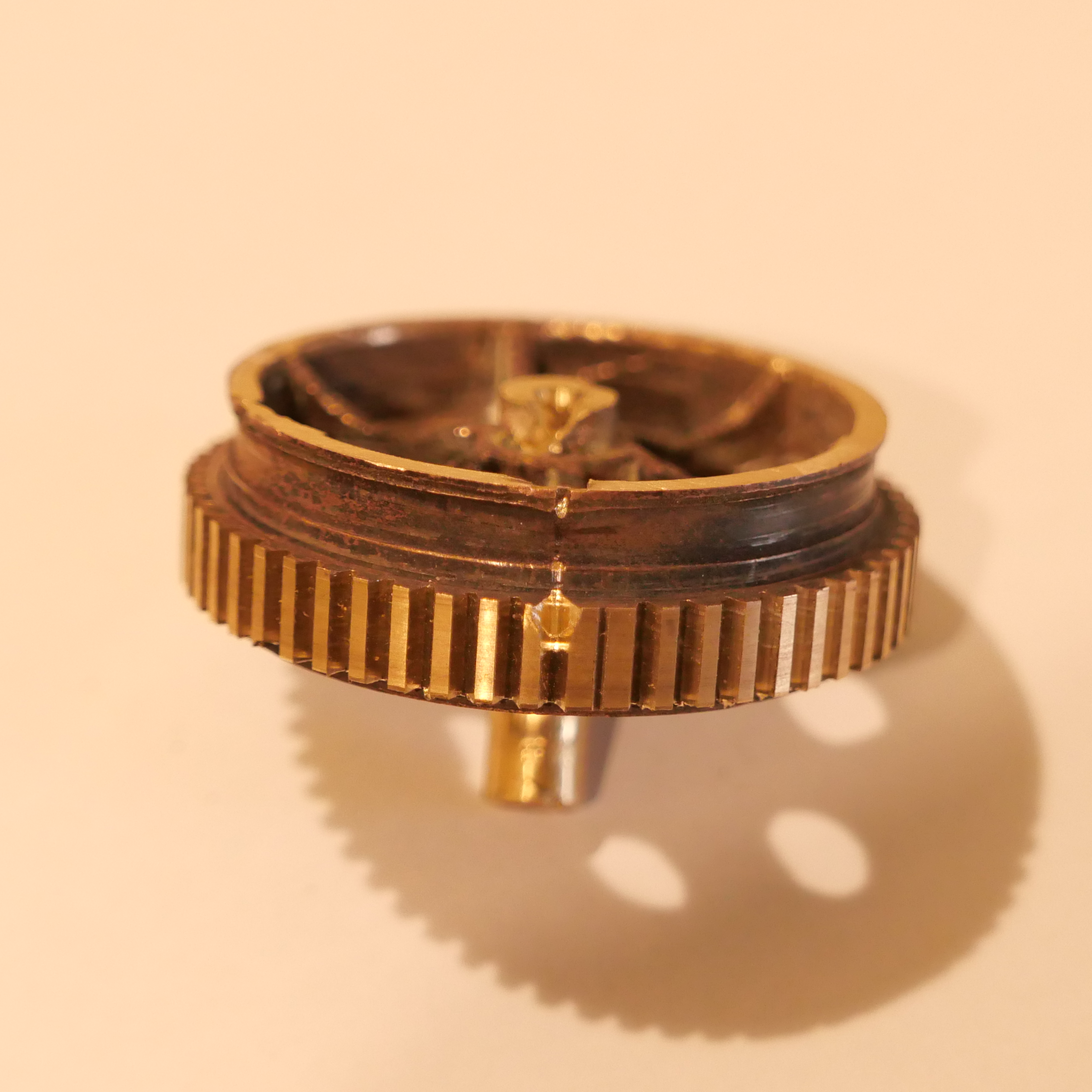 But what about finishing cutting the gear teeth?  It will need a new shaft.   My plan is to machine off the bent shaft, insert a new steel shaft while holding the external circumference of the gear in the lathe chuck.  Might just work.  If the over-gashed tooth looks too odd when I finish cutting the teeth, I will fill the void with bronze or silver and re-machine it.  Watch this space.

6 Comments to “Learning from MISTAKES”