This post will be of no interest unless you have one of these camera gimbals.  I found, like other reviewers of the gimbal, that the 1/4″w thumbscrew which secures the gimbal to the camera is not trapped.  I have lost it once already when I wished to use it.

There are two possible slots where the thumbscrew can be positioned, depending on the size of the camera, and I suppose that is the reason the thumbscrew was not trapped by the manufacturer.

The fix was not difficult for a machinist with a lathe and a 1/4″w tap.

I made a 1mm thick brass disk, 10mm diameter, and tapped a 1/4″w hole.  Then milled a 1mm deep circular matching recess in the joining plate after carefully determining the correct position. Put the disk onto the thumbscrew thread after checking the position, then glued the disk to the thumbscrew. 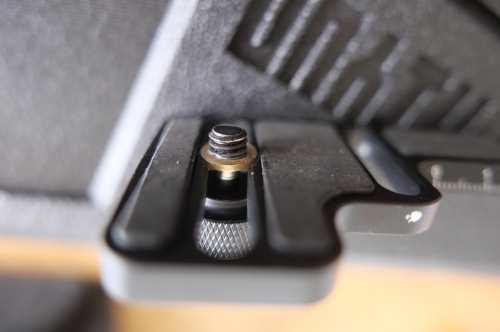 Thumbscrew now trapped in position on the gimbal-camera joining plate.  The brass round nut is glued to the thumbscrew and sitting in a carefully positioned, machined recess in the joining plate.

Of course, the positioning is for one camera only.  But because the position is fixed, it makes joining the gimbal and the camera faster.  If the gimbal was to be used for more than one camera, a slot should be machined rather than a circular recess.  When I want to change cameras one day, I can easily melt the Super Glue, and machine an extra round recess or a slot in the plate.

A gimbal is a device which keeps an object on a steady horizontal level, even as its support moves and tilts.   Such as a ship’s compass.

The following video was shot on my iphone, without a gimbal, but about a gimbal, which I recently purchased.  The video is brief, and not intended to be anything but a glimpse.  To be honest, there is a bit of a learning curve with the gimbal, and I am just beginning.

I hope that it will help to improve my video shoots.