I have recently bought one of these machines, so here it is….

To be accurate, it is a miniature traction engine.  1/4 size.  A full size one would weigh between 14-18 tons, and a bit beyond what SWMBO would have agreed to me spending.  I see ads in the English sites offering them for between 250 and 400 thousand pounds.

This one weighs about 250kg, and it cost me a bit less than a full size one.

It is powered by lighting a coal fire in its belly, and producing steam.  The engine sits on top of the boiler.  You can see the cylinders, connecting rods, crankshaft and gears in plain view.   The steam is under a pressure of 100lbs per square inch.   It passes through the high presssure cylinder (the small one) then through the low pressure cylinder to convert the heat energy of the coal into kinetic energy of motion.   The fact that the two cylinders are powered by the same bit of steam is the reason it is called a “compound” steam engine.

Steam traction engines were the predecessors of modern diesel tractors.

As road locomotives, they pulled loads of many tons, at low speeds, from 1869 to the end of WW2.  This one was a scale model of a road loco of circa 1918.  Other types were used on farms as tractors (not terribly effectively, because of their weight), in saw mills to power the saws, and as stationary engines to power some factories.

Rather surpisingly, they are a quiet machine in comparison to more modern diesel and petrol powered ones.  They sound a bit like a steam train, puffing and chuffing along.  I fine the sound is very appealing.  I also like the exposed mechanicals.

The coal smoke is not quite so pleasant, but the Welsh steaming coal which I am using, produces very little visible smoke.   Most of the white stuff which is seen is esacaping or exhausted steam which has been cooled to become water vapour.   Steam, as I have discovered, is invisible.

So back to my traction engine….    It was made by a gentleman in Adelaide, commencing in 1984, and completed in 2016.   He also made quite a few steam train engines and traction engines over the same years.  He told me that the compound engine was difficult to make due to its complexity, and the tight squeeze of all of the components. 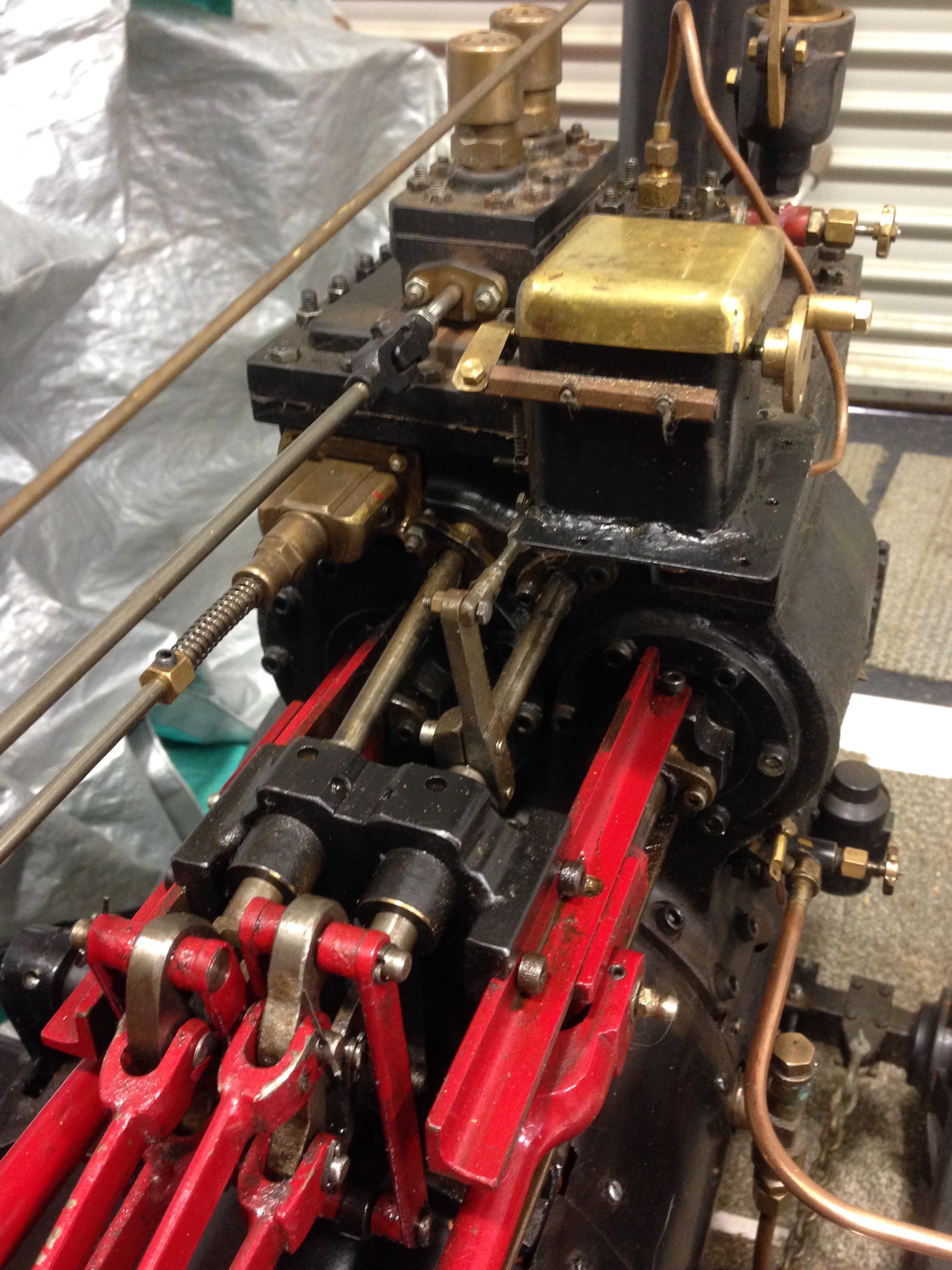 The square box with the brass lid is the mechanical lubricator,

The boiler is constructed from copper sheet, 4mm thick, riveted and silver soldered.    It has been tested, and certified to 100psi.  Re-certification is due, and is planned to be tested again in a couple of weeks.

I have found a few issues with the engine, and am gradually attending to those issues.   The piston rod glands, valve chest, main throttle, and starting valve were leaking steam.  Those leaks have been reduced to a level that is acceptable.

One of the big ends is noisy.  I noticed that the plans called for adjustable wedges, and they have not been used.  So at some stage I plan to make them and install them.  That should tighten up the noisy bearing.  The valve eccentric straps are a bit loose, with noticeable movement, but they should be fairly simple to tighten.

The mechanical lubricator is not working.  I have cleaned and adjusted it, but to no avail.  There does not seem to be enough movement in the driving arm to click the gear over.  Might need a re-design or a new lubricator altogether.

Some of the water supply pipes are modern flexible types and look totally wrong, so they will be replaced with rigid copper pipes.

The painted colours are appropriate for a working road machine, but I am planning a more fancy appearance with brass belly strips, polished steel cylinder covers, some pin striping, and a name plate.   Also a Fowler coat of arms.  (It is a Fowler Class R3).

Still contemplating the name.  Traction engines seem to be named after girlfriends wives or mistresses, famous people, Lords and Earls.   There is a nice movie from the 1960’s about a traction engine named “The Iron Maiden”.  Its rival was named “England Expects”, a name which resonates.   I have long been an admirer of Sir John Monash, so that is quite a possibility.  Monash was the leader of the Australian Army 1916-18, and he was so effective that the British Prime Minister of the day said that WW1 would have been a year shorter if Monash had led the allied forces.  Monash was also my university.  And we share first names.  But still considering.

So you can see that I intend to place my own stamp on this machine, and have lots of interest and fun doing it.

Boiler fire started, extractor fan on the funnel to increase the draft through the firebox, Ange, Tom and Stuart waiting for steam pressure to rise.

I attempted to upload a 2 minute video, but just too slow.  Might try later.