The Most Powerful Steam Engine in the WORLD (?).

Excluding nuclear powered steam turbines and some others.  But 12,000hp is not to be sneezed at.

At Sheffield’s  Kelham Island Museum  we (Jennifer Edwards, a blog reader of johnsmachines.com, and I), saw a steam engine which was big, but not as big as the triples at Kempton.  So how can it be “the most powerful etc”.

Well, it is a triple, but not a compound triple.  It is a simple triple.  Double acting.  so each cylinder puts out power like it is the HP cylinder of a triple expansion engine.  It must be a prodigious consumer of fuel and energy.

Why so much power requirement?  Well this engine was used to power a rolling mill, to curve the armour plating of battleships.  Plates up to 16″ (400mm) thick.  The steel was red hot while this was being done, and the plate was rolled back and forth until the desired curve was reached.  Several re-heatings of the plate was required until the desired curve was achieved, so it was important that as many passes as possible were done in the shortest time.  So this engine is capable of full power reversals, very quickly.  Unfortunately there was insufficient room in the museum to fit the rolling mill.

This large crucible sits at the Museum entrance.  (Jennifer for scale.)

And we saw that happening today.   It was very impressive, and apart from some clanking of the huge spur gears, very quiet. 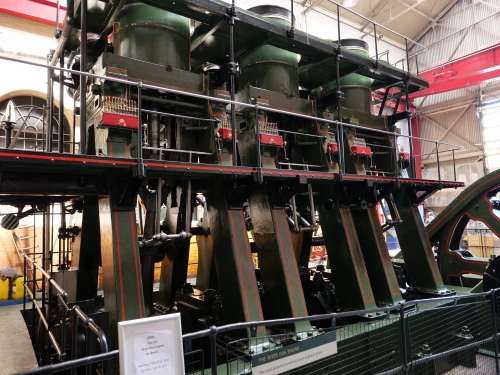 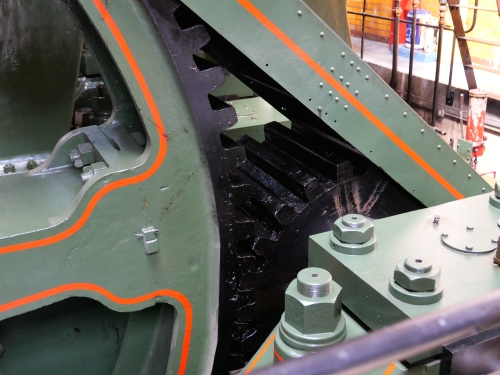 Current modern boiler is no match for the original 10 Lancashire boilers.

The demonstration lasted only 3 minutes, before the large gas fired boiler ran out of steam at 100psi.  And they had been heating the boiler since yesterday.  Under industrial use, 160psi was used.

Jennifer is trying to obtain some plans to model the engine.  Hmm…I might have discovered my next model too…

3 Comments to “The Most Powerful Steam Engine in the WORLD (?).”