Before Trevithick were Savery, Newcomen and Watt.  And way before them, Hero of Alexandria (1st century AD)

Thomas Savery, a military engineer from Devon, took out a patent in 1698 for a steam operated pump.  It had no moving parts, except some valves.

It had 2 low pressure boilers.  Steam from one boiler was introduced into one chamber, and water was then introduced which condensed the steam, forming a partial vacuum, which sucked up water from below.  Steam from the other boiler was then introduced, which pushed the water upwards.  As a pump it was a failure, and it is not known if any were made.  Modern reconstructions have also been unable to pump water successfully. But the patent lasted, and forced Newcomen to involve Savery with his invention in 1712.

Thomas Newcomen was an ironmonger and Baptist lay-preacher from Dartmouth, Devon, and he is the reason that I am currently in this pretty Devon town.  There is an original Newcomen “atmospheric engine” in Dartmouth. 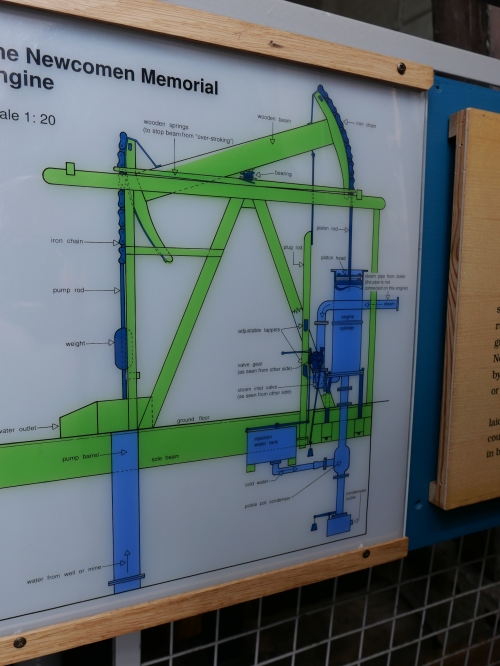 (taken at an angle to avoid window reflections)

The Newcomen pump, (for pumping water from the mines was its purpose) also used the condensation of steam creating a partial vacuum, as its principle of action, and it was quite successful.   So successful in fact, that more than 600 of them were built, and they continued to be built well after the improvements of Watt and Trevithick, into the nineteenth century.  In the diagram above, the 22″ power cylinder is on the right, and the pump cylinder is on the left.  The genius of this design is that the pump can operate in the depths of the mine (or canal or military trench) while the engine remains above ground.

It is incredibly inefficient in thermal terms, converting only 1:200 of the energy from burning coal into the mechanical energy of the pump, but it was by far, more powerful than any pumps driven by man, horse, wind or water at that time.

The room in which the Dartmouth engine is housed is just bigger than the 15′ high engine, so pictures are difficult. 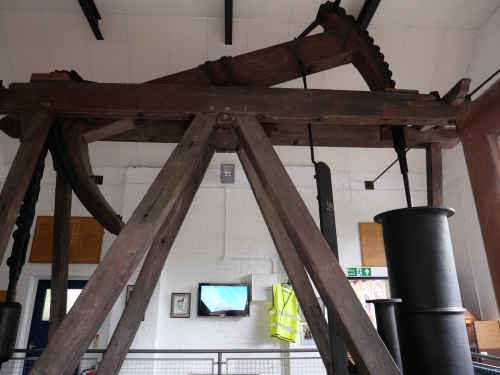 All wood, except the power cylinder on the right, and the pump and pipes (not seen).  The curved ends of the big wooden beam keep the piston rod and pump rod vertical.  Cylinder boring had not been introduced yet, so the gap between piston and cylinder was up to 1/4″.

The valves to admit the steam and water were originally operated by hand, but later some automated simple levers were introduced.  Note the square nuts (original).  It appears that the woodwork is mostly original, albeit repaired in places. 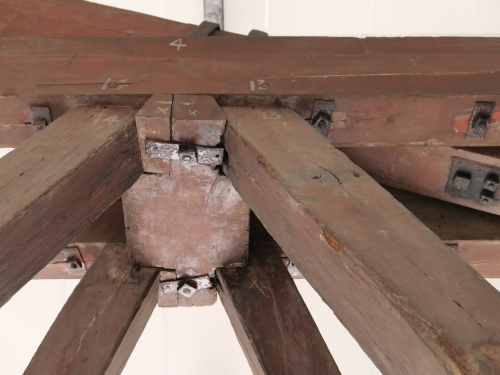 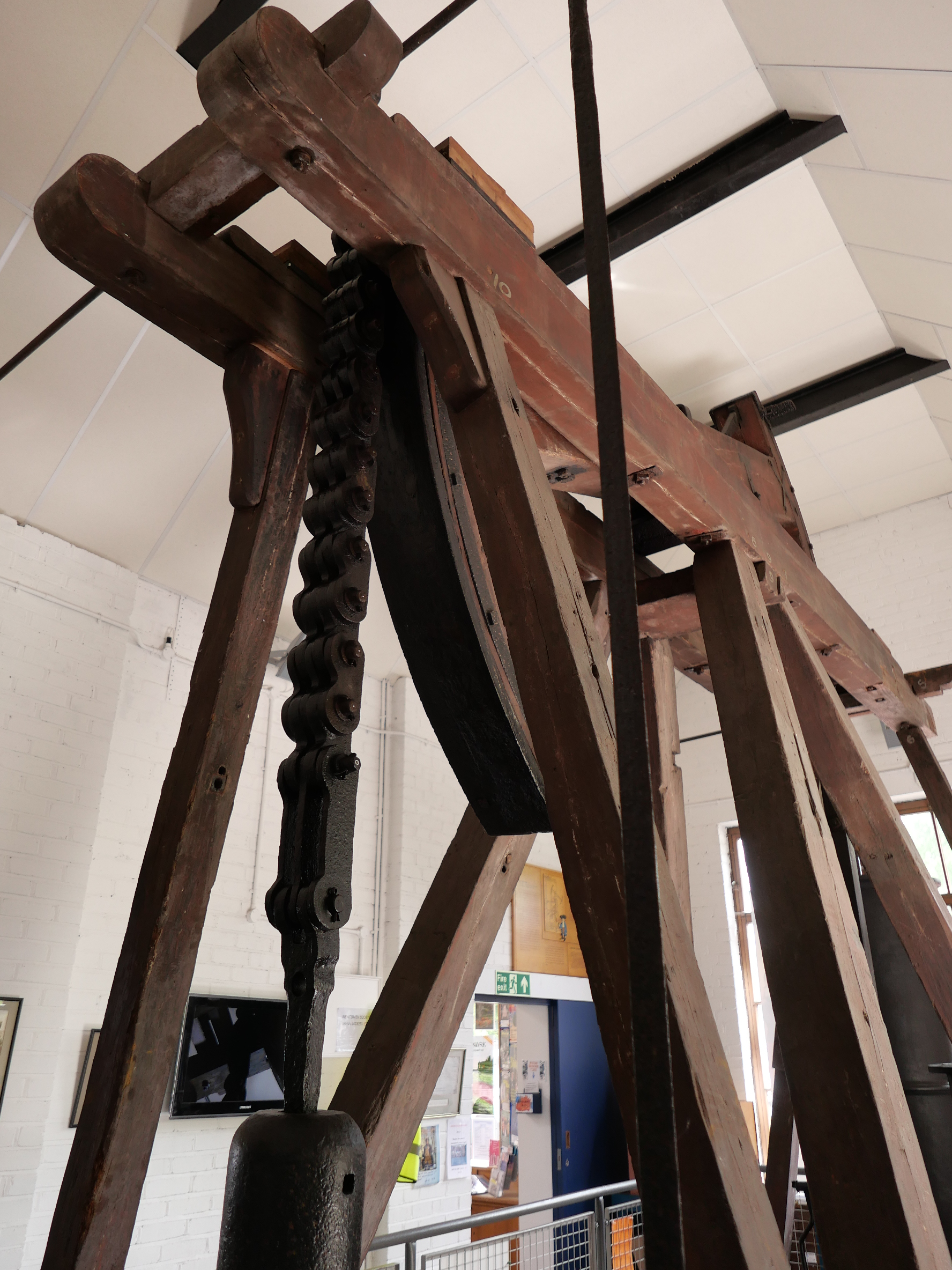 The Newcomen engines were simple, and effective.  Their main problem was that they consumed vast quantities of coal.  They were widely used, but there was/are no coal deposits in Cornwall, and transporting coal from Wales was costly, and taxed.

James Watt‘s big contribution to steam engines was to add a condenser to the engine, which was separated from the power cylinder.  That doubled the efficiency.  He also sealed the top of the cylinder, so both strokes of the piston rather than just the down stroke, were power strokes.  But it was still a vacuum powered engine, and therefore had an absolute limit of working pressure of something less than atmospheric pressure (15psi).

Richard Trevithick‘s main contribution in 1800 was to increase the steam pressure available, by inventing the “Cornish boiler” which produced steam at 50psi, and even up to 145psi.  This more than doubled again the thermal efficiency of the steam engine, and made it much more compact, leading to his applications of steam engines in road vehicles, railway locomotives, ship engines, and industrial stationary engines (like my model dredger engine).

Tomorrow I am driving to Portsmouth.  So I will leave the west country inventors of steam engines.  It has been a fascinating journey.

First stop, Fort Nelson.  To renew my acquaintance with the Ottoman bombard, which was the subject of my blogs several years ago.

2 Comments to “BT. Before Trevithick.”