Today I loaded the Fowler 3R traction engine onto its trailer and drove to Werribee, to have an official inspection of the boiler.

This is not a legal requirement, because I can operate my traction engine  whenever I please on my own property.  But all model engineering Clubs and Societies require a current certificate before they will permit steam engines to be operated at their meetings.

The maker of my traction engine had the boiler inspected and passed about 18 months ago, but that certificate has now expired.  So it needed re-certification.

But, boiler explosions are horrific, so the caution is understandable.

My boiler is made of copper, thus avoiding the problem of steel boilers which gradually becomed thinned by rust.   And my boiler seams were joined by silver soldering, which, if expertly done is as strong as the parent metal.  As a matter of interest, the maker of my boiler told me that he had used $AUD1000 of silver solder in the construction of the boiler!

The test today involved pumping water into the boiler at 25% above maximum operating pressure, and holding it there for 20 minutes, checking the boiler for leaks and distortion.  It passed that test without problem.

The next test was for the functioning of the safety valves.  I had cleaned them and replaced the balls and polished the seats, and I had seen them blowing off when the pressure was above 100psi, so I was fairly confident that the certification was “in the bag”.

So the fire was lit, and after some coaxing because I had stupidly forgotten to bring the chimney blower,  the  steam pressure was raised to 100psi.  The safety valves started venting off.  But, the test is fairly demanding.  The fire was roaring, the steam blower was turned on full, and the pressure continued to rise.  It rose to 120psi which fails the test because the safety valves should have released enough steam to keep the boiler pressure at 100 psi or 110psi maximum..  Some adjustments to the safety valves did not fix the problem.

Some machining will be required to fix the valves, but after consideration I have ordered brand new safety valves and the test will be re-done when the new ones are fitted.

The boiler inspector was quite particular and proper, and very helpful.  I am grateful that this safety issue was detected, and I totally agree that it has to be fixed.  Thinking back to my problem of about 1 month ago, when I “dropped the fire”, (see “Holes in Swiss Cheese) I now believe that the problem was partly caused by the inadequate safety valves.

Add one more hole to the Swiss Cheese theory of disasters. 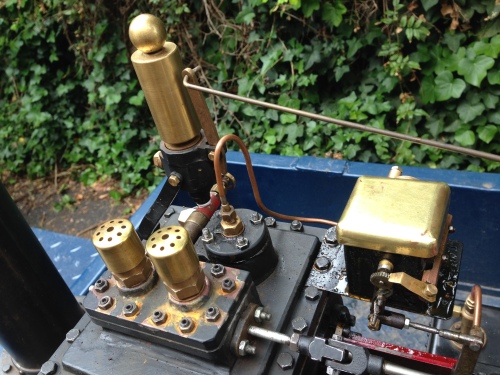 5 Comments to “The Boiler Inspector.”