Antarctica Again. Bear with me. This is so weird.

OK, I will get back to the metal working soon.  I promise.

But this is so odd that I have to record it.

Reader Richard  thought that I would be interested in this Antarctic site, which was recorded on YouTube a few years ago.  The original YouTuber, thirdphaseofthemoon,    was lampooned in the comments on his post,  having called the site a “mega alien city” but I believe that this site could be significant for a different reason.

Go to 75ºS 0ºE (not exact but close enough.  The exact coords are in the screenshots which follow.)

And the following screen shots go back in time.  Just bear with me. 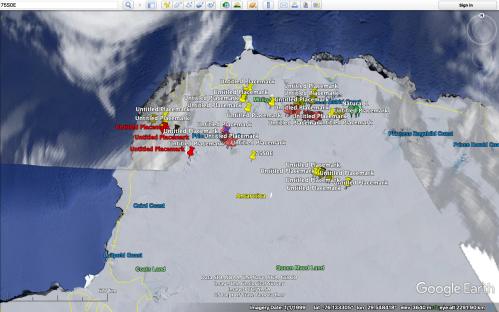 Note the fake cloud cover which appeared a few days ago.

The area of interest today is at the centre of the screen, and is marked 75ºS0ºE.  Note that it is in the middle of the shapes which I posted yesterday.

Zooming into this spot using the most recent Google Earth photos shows this.. 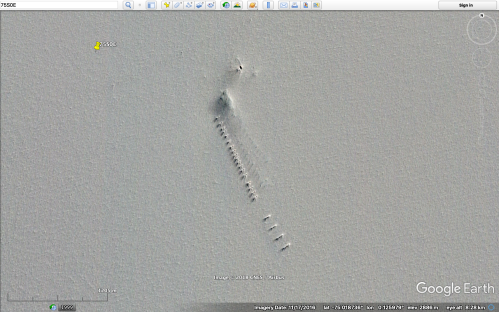 Now you have to admit, that is unusual!  A flat, snow covered plain, with a bit of a hill, and a straight row of somethings, at regular intervals, about 2km long.  And a hole of some sort to the NE.   Stay with me!! 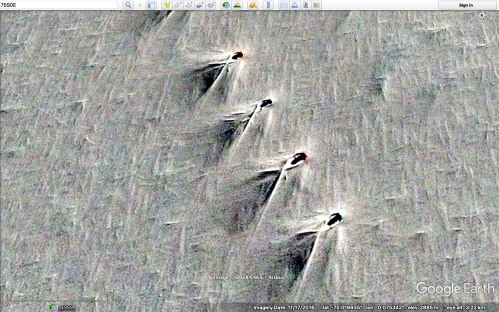 These images are from 2016.  Close up, each “something” appears to be a hole.  The V shaped patterns to the SW I believe to be snow patterns, formed by the prevailing wind.  Note the reddish discolouration.   (Please check this out in Google Earth yourself!) 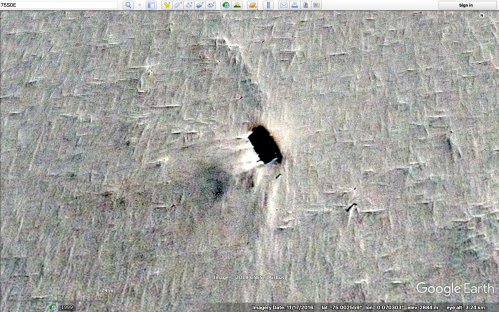 And this is the big hole/cave mouth/whatever to the NE.   All a bit puzzling.   So let’s go back in time.   Google Earth does not make this exercise easy, because images disappear, and you have to zoom out, then in, but it can be done with persistence.

Well, look at that.  2013.  The same spot.  An airstrip, some well travelled tracks,  excavations in the region of the big hole/cave mouth, and if you zoom in, you can see some machines.  Note the red discolouration again.  I have no idea what that colour is caused by.

Now we go back through some years….

2012.  Before the excavations.  Look at the shape of the mound under the snow.

2011.  Note the shape before the excavations.  What does it remind you of?  Possibly a V shape or a chevron?  Does it remind you of some of the UFO’s which have been video’d in YouTube lately?    Hang in there, it gets better!  The chevron appears first in the satellite pictures of the area in 2001.

The oldest Google Earth image which I could obtain of the area was from 1984.  It is slighly north of the 75ºS 0ºE area of the later chevron and the excavations.  What do you see?   I see lots of coloured objects, with the same shapes, and differing orientations.  I do not believe that these are natural features or swamp gas.

1984, close to where the chevron shaped mound later appears. 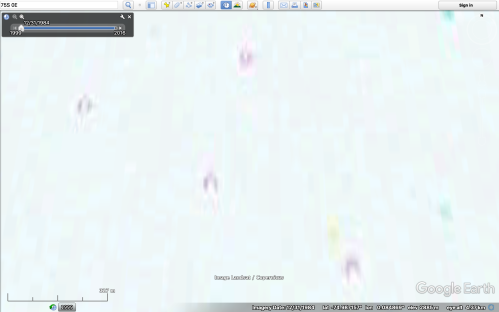 These “objects” are about 60 x 150 meters big.  Pinks, yellow, green.   And they are located around the region of the chevron shape, and nowhere else that I can find!  What are they?

So, what have they found, and are excavating in 2013?  Dare I say it?  Well it looks like a UFO shape to me.  The 2013 regular row of holes and the big hole, I suspect are human efforts to investigate whatever is buried, without obviously displaying it to observers like us.

And I have no idea what the 1984 coloured objects are.