I was a bit unsure about visiting this one.  A smaller museum, and I knew from the web site that it was not a steaming day.  But it was only a half hour drive, so off I went.  I arrived at the address, and there was a supermarket, but in a corner of the supermarket block there was a tall, old,  sizeable red brick building with no windows.  And a sign… “Bolton Steam Museum”.

In I wandered, and a gentleman in overalls approached.  This was a volunteer working day.  But Ian (apologies if I got the name wrong), stopped his task and spent over an hour showing me around, explaining the finer points of his babies, starting some of them on electric motors to demonstrate the movements, then invited me to a cuppa with his mates, where there was further discussion, mainly about rope drives and stone engine bases.

No parking or entry fee on a non steaming day, (but a donation was appreciated).

The machines were not the monsters of Kewbridge or Kempton pumping stations.  They were mostly from the industrial age of the midlands 1840-1930, powering textile mills, sawmills, and factories.  Some were quite big.  All were beautifully restored and presented, and for once, the descriptive labels had lots of information about the physical characteristics and histories of the engines.  A nice aspect was the elevated walkway down the centre of the room, allowing a good view above the engines.

Some photos follow.  Not as many as the museum deserves, because I am nudging my  Wordpress limits. 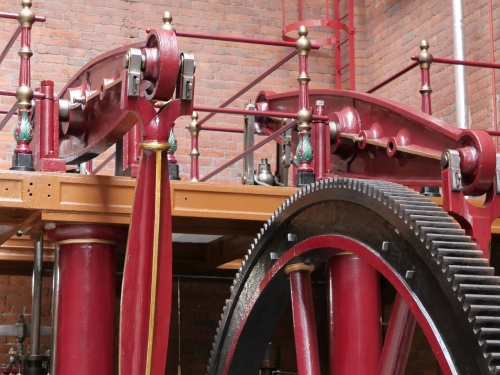 The twin beam engine of 1840 is the oldest engine in the museum. It started life as a twin, but when higher pressure steam became available it was converted to a compound twin.  Note the non identical con rods.  That happened during the conversion to compound.  Partly seen is an excellent collection of engine lubricators.

This is a “non dead centre” engine.  It has 2 con rods, one for each piston, but only one crank.  Watch the video below and see if you can figure it out.  It ran 100 looms in a textile mill. 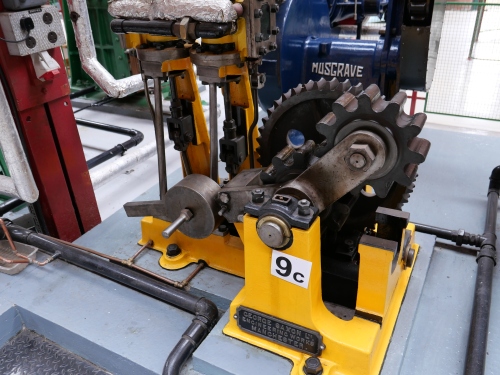 Two of the barring engines.  These were small steam engines which were used to rotate the flywheel of a much bigger engine, to its correct starting position. 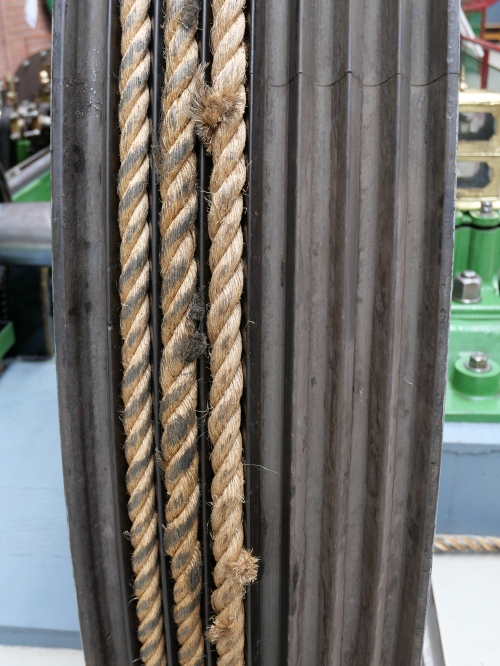 For the first time ever, I saw rope drives in action.  Rope made of cotton was preferred, but these days sisal is usually used.  Each rope could transmit 54hp if made of cotton, 30hp if sisal.  They worked in V shaped grooves, and hung rather loosely between the pulleys, the weight of the rope wedging the rope into the groove.  The splices, joining the rope into an endless loop were made by specialists, on the engine, and unlike marine splices, barely increased the diameter of the rope.  The splices which I saw extended over about 2 meters of the rope.

This museum is another gem.  I have described only a few of the 24 major items on display.  There are many more, including engine lubricators, gauges, and valves.  It was well worth the stay in Manchester, and more than made up for my disappointment at the  Museum of Science and Industry.  Try to see it on a steaming day.  The dates are published on the website http://www.nmes.org

Also, the 36 page “Souvenir Museum Guide” is the best guide of its type I have encountered and contains detailed descriptions and colour photographs of the major exhibits.  It is a steal for £2.  The History of the Bolton Steam Museum is 64 pages, crammed with photos, and after a quick browse I am looking forward to reading it.  Also IMO, a steal at £3.

Sincere thanks to the volunteers who shared their enthusiasm for steam engines with me today.  I do hope to return one day to see the engines running on steam.