The CNC lathe has 3 belts.

There is a V belt from the 3 phase motor to the main lathe spindle.  Although I changed the motor and the pulleys, the old belt fitted, which was good.  No hassle.

But the stepper motors driving the lead screw and cross slide screw, and their pulleys were all new, so I had to buy new HTD (don’t know what HTD stands for) timing belts.  HTD belts are very strong, inelastic, flat belts with teeth,  And the teeth are rounded.  The pulleys have complementary teeth which mesh positively and accurately.

From my designs and CAD drawings I knew the distances between shaft centres, and the sizes of the pulleys.  So I looked up several belt length calculators on the Internet, and calculated the belt lengths.  Trouble was that each calculator gave a different result!  Two of the calculators gave results which were close to each other, so I went with those, and ordered the belts.  When they arrived, I installed the belts, and was pleased that the lead screw belt was perfect, but the cross slide belt was obviously too long.  Useless for me.  At ~$AUD30 each, I did not want too many trials before getting the correct length.

So I installed the too big belt on the pulleys, and measured the deflection. It deflected 45mm from the straight line between pulley edges.  Using Pythagoras’ theorem calculated that the belt was just over 20mm too long.  Ordered another belt, which arrived today, and installed it.

This time it fitted perfectly.

Thanks Pythagoras!    (For a right angled triangle, the square of the hypotenuse is equal to the sum of the squares of the other two sides.  Remember that one?)

Belt covers will be made and installed.

Deflect the belt in the middle, and measure the deflection. 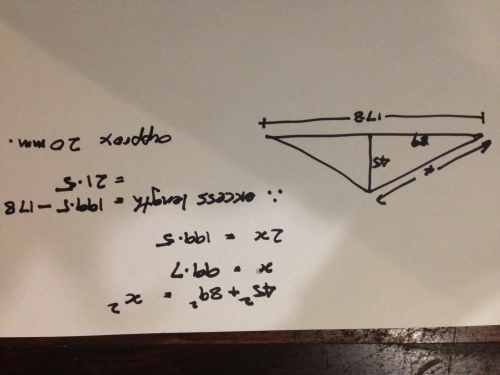 Not rocket science.    If it looks upside down, you must be in the northern hemisphere.