In a previous post I admitted to breaking a BA7 tap in the Edwards air pump of the Triple Expansion Engine, and being unable to remove it.

The hole being threaded was one of 4 to be used to hold a water pump to the air pump. It was 2.5mm diameter (i.e. pretty tiny)

I tried to grasp with pliers the fragment still protruding but it then broke below the surface.

I tried to break up the embedded tap, using a HSS punch, with partial but inadequate success.

I briefly considered drilling a hole from the other end, and punching in the reverse direction, but that would really have compromised the pump.

So I decided that the three remaining bolts would have to be enough.

A night sleeping on the problem.

Next day, with a fresh determination, I decided to attack the problem again.

I had some used carbide milling cutters 2mm diameter, and I was prepared to sacrifice one or two of them.   So I carefully set up the Edwards pump in the milling machine. 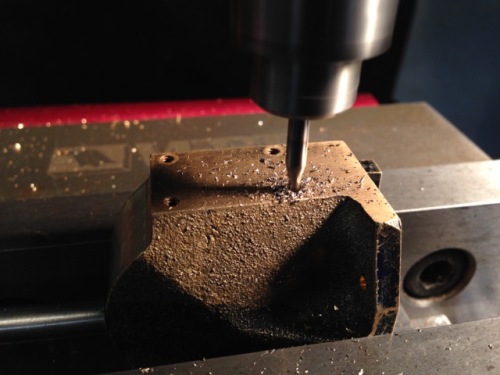 You can see the three good tapped holes.  The carbide milling cutter chomped away at the broken tap, and using gentle pressure, and ignoring the metallic screeches, the tap was broken up and most of the fragments came out.  I was prepared to sacrifice the milling bit, but it seems to have survived this insult.  The harder metal always wins.   It was probably fortunate that the tap was carbon steel and not HSS.

Somewhat surprisingly, the tapped hole was in reasonable condition, and it accepted a BA7 bolt, although I will not be aggressively tightening this one.