The Tasmanian Oak lagging looked too pale white to my eyes.  With use, steam, oil, dust, water, workshop grime and sunlight, it would have gradually acquired a well-used patina, but I prefer instant gratification.

So after consulting my resident wood finish, artist, architect, expert, (SWMBO), I applied some wood-stain. 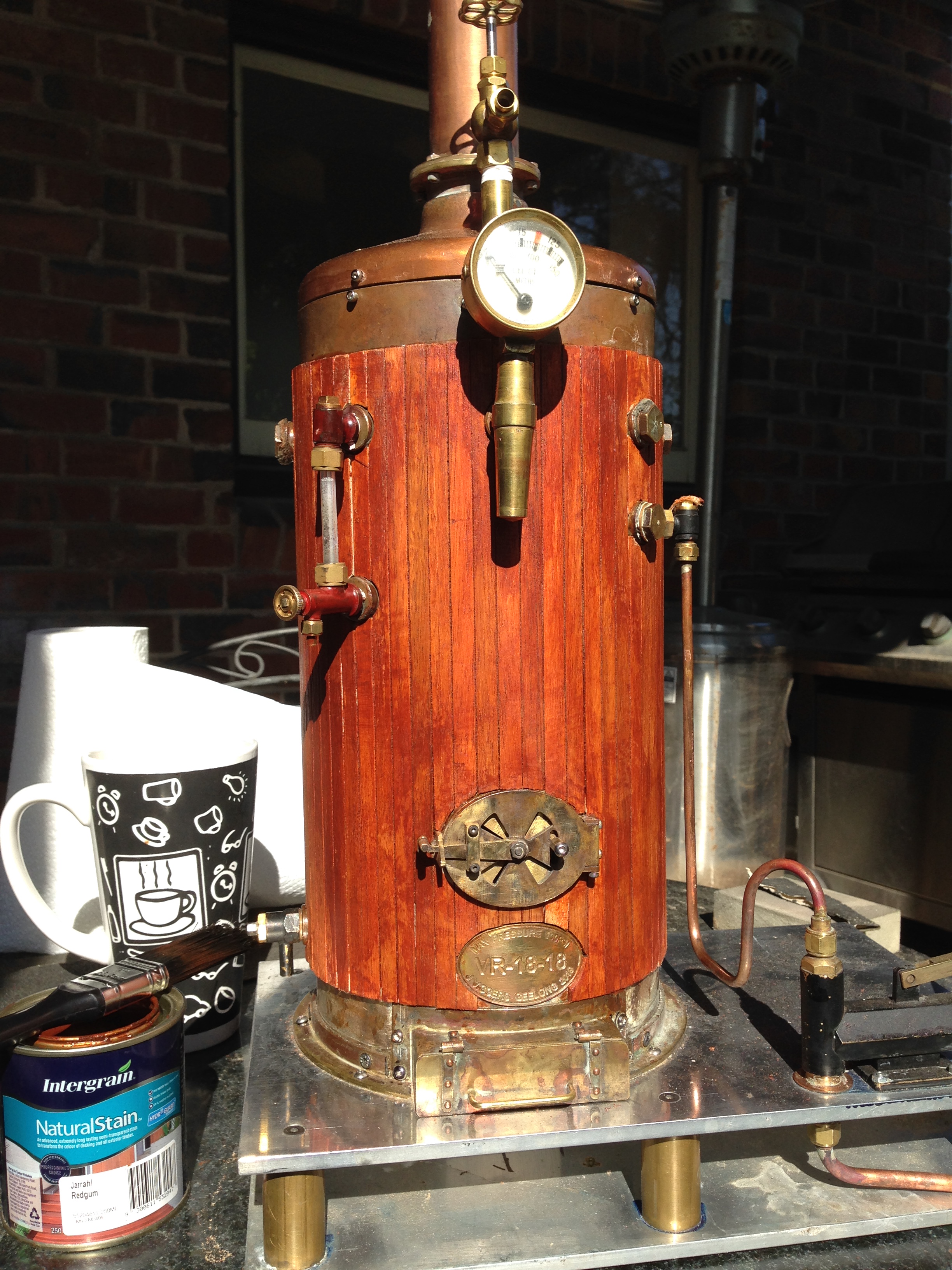 Too orange, too patchy, she said.   And the white in the joins looked wrong.

Too orange, too patchy, and too much white showing.  “Put on some black boot polish” she directed. 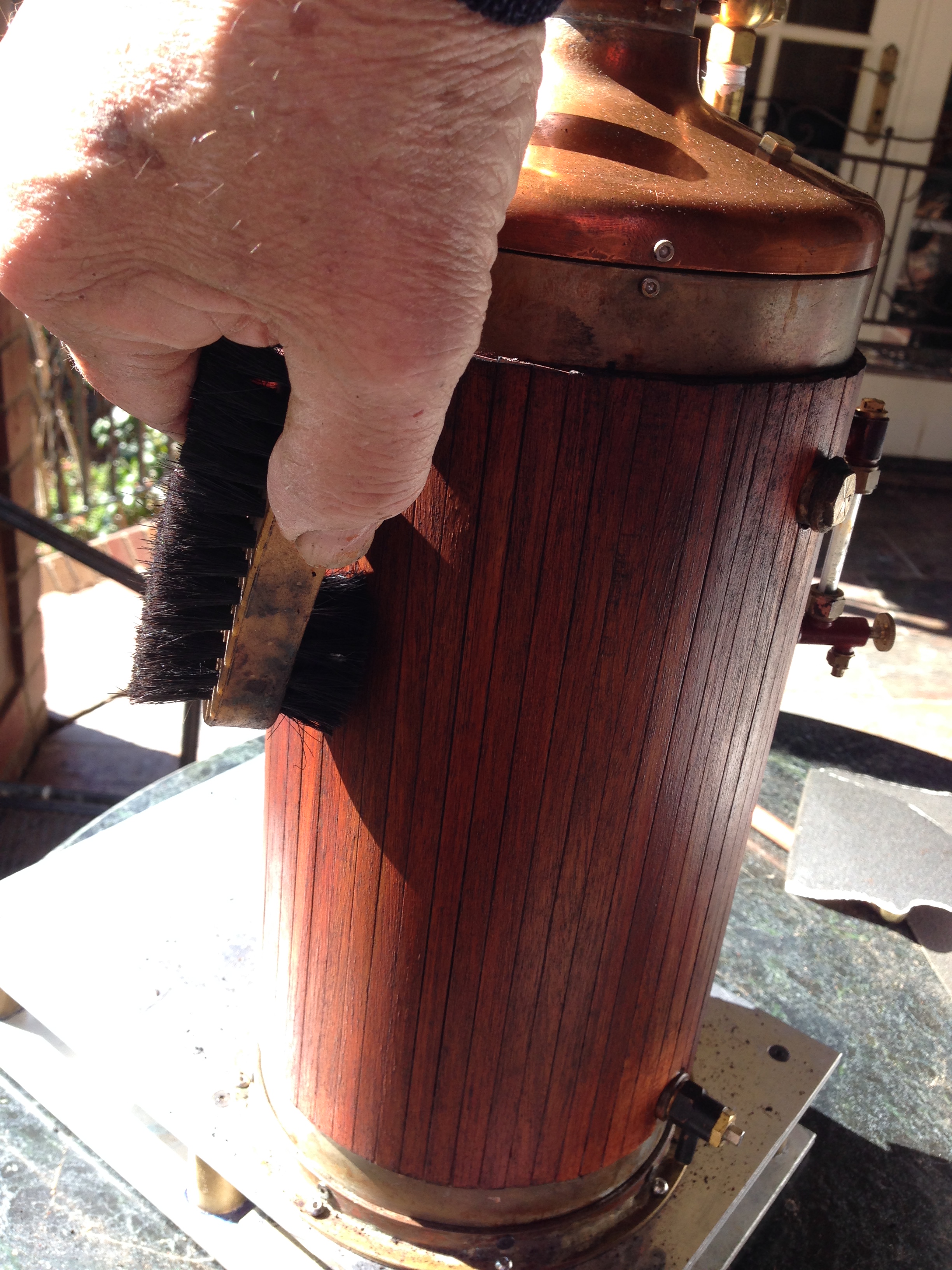 With a boot polish brush… 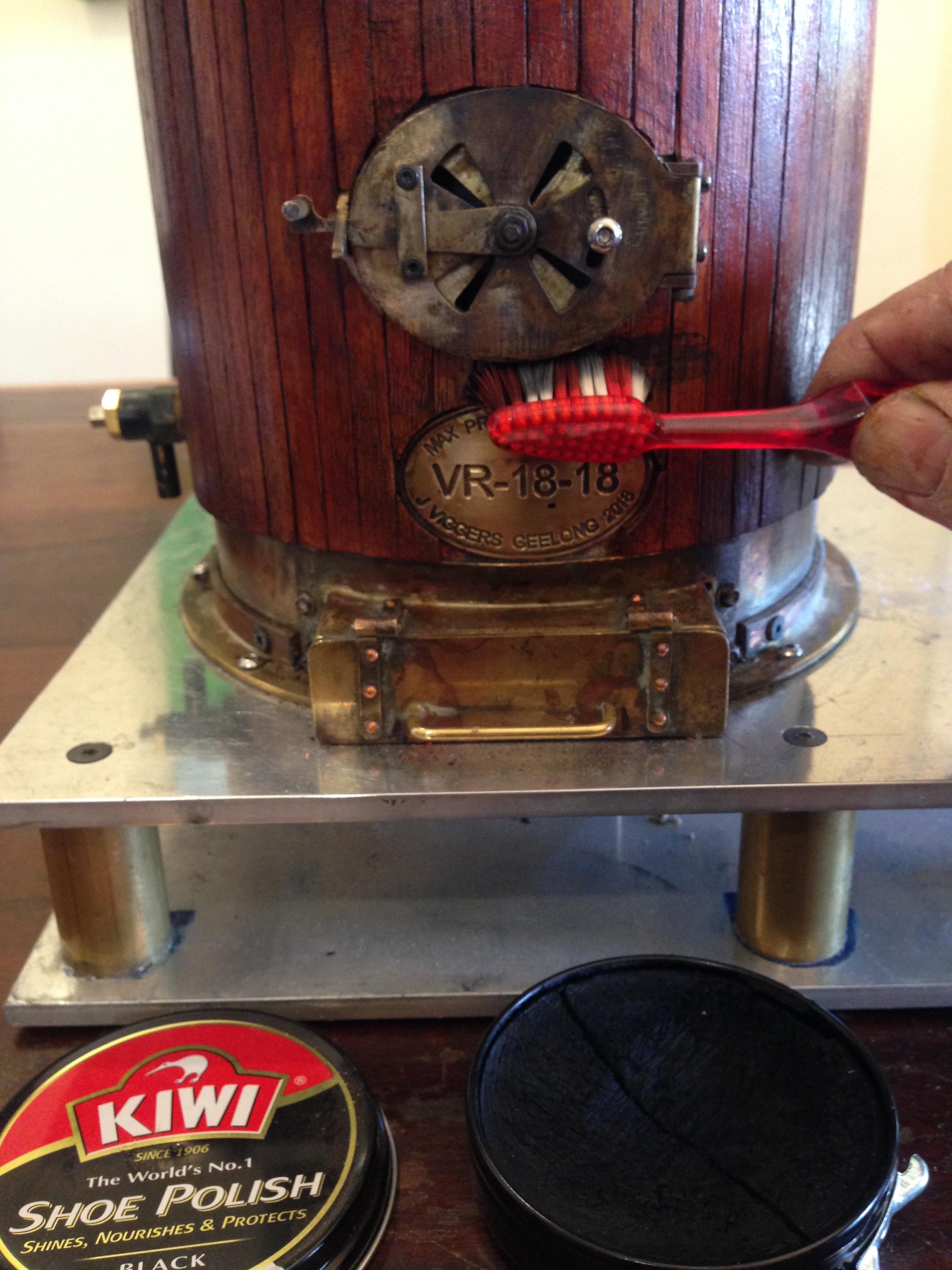 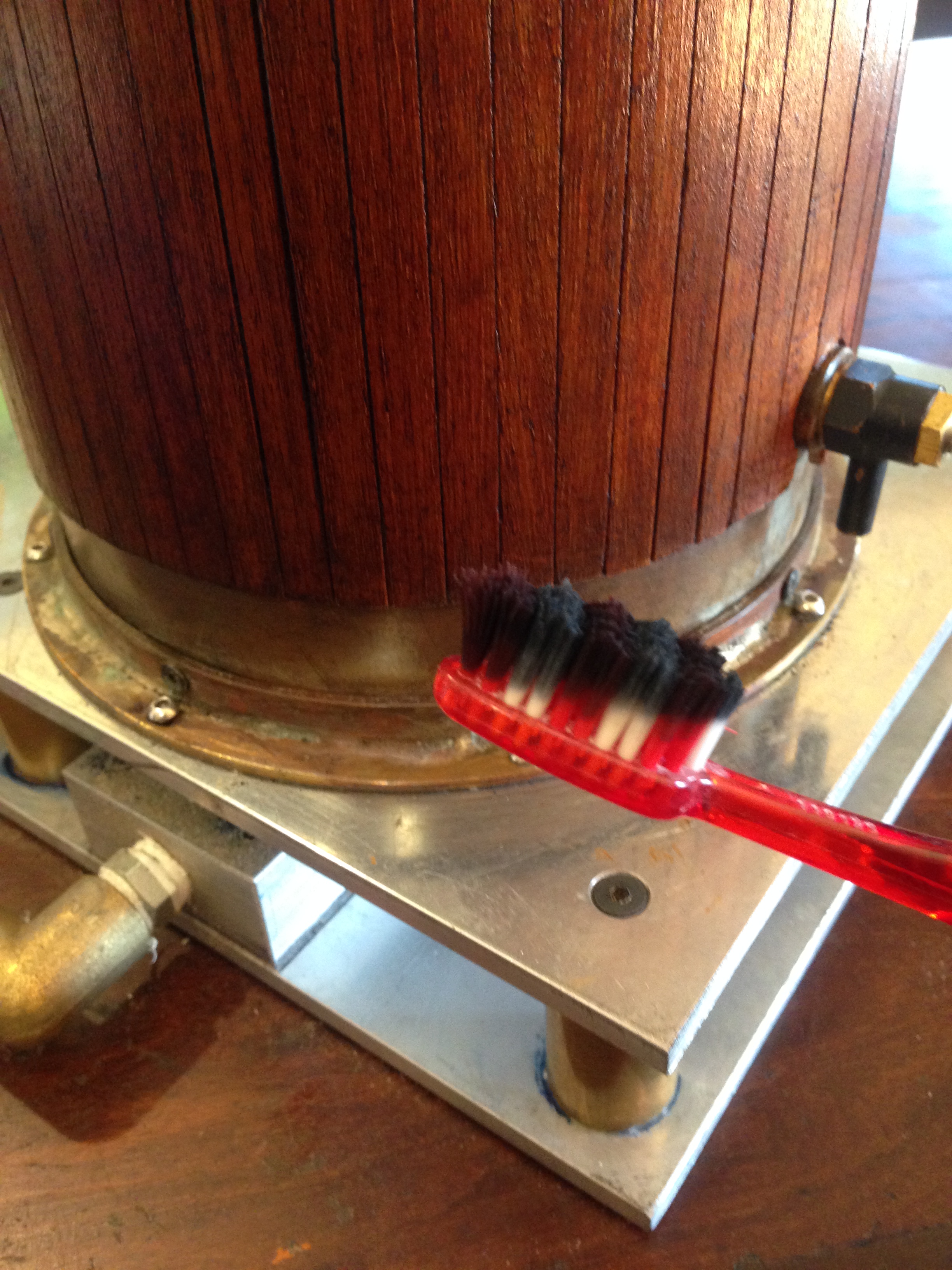 … hmmmm.   I better clean her toothbrush before putting it back….

…(acknowledgments to Tubal Cain for using his old gag…) 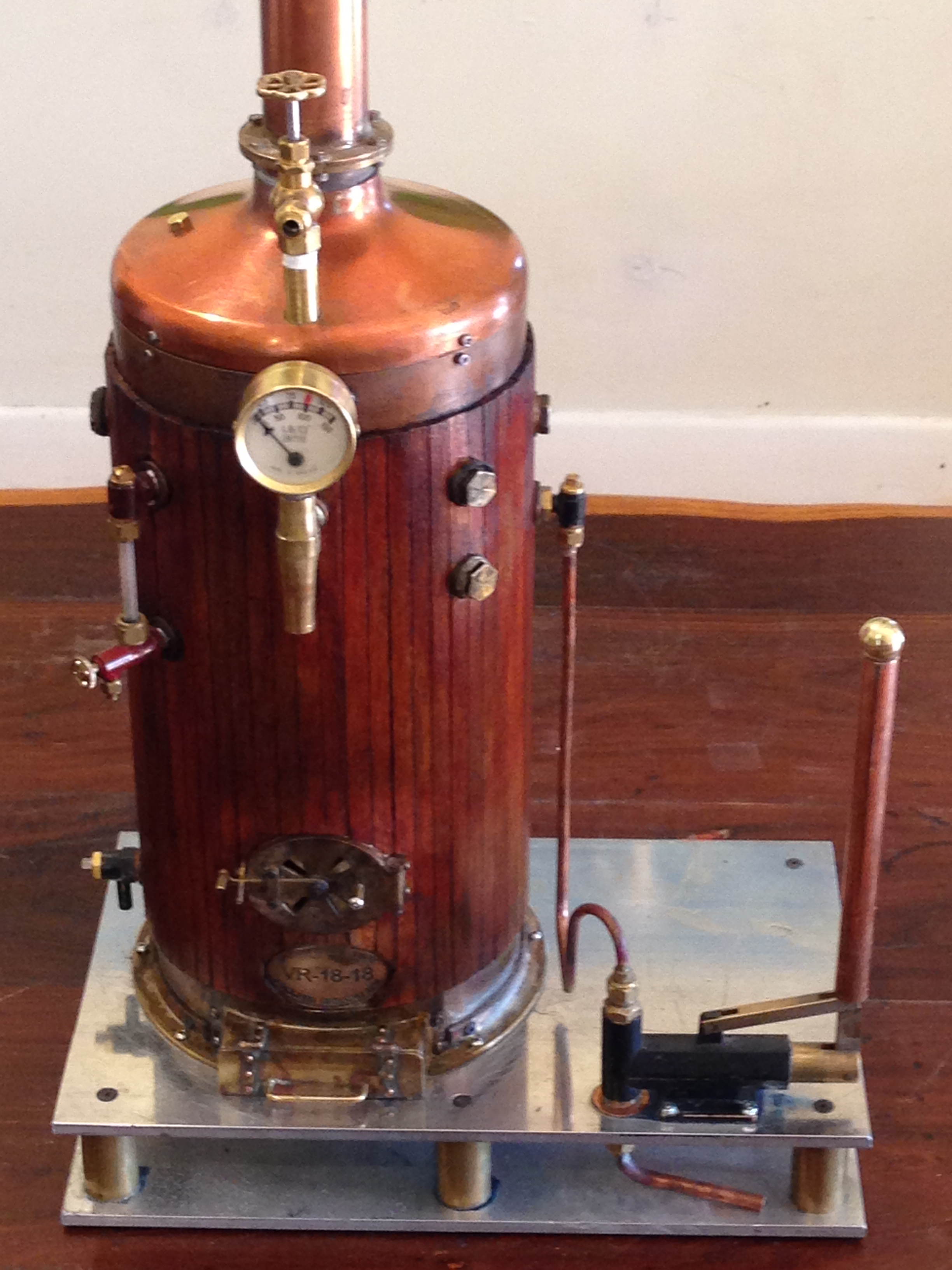 That’s the look I was wanting.

Now just waiting for the brass bands to arrive.

Ben De Gabriel from EJ Winter, Sydney, had sent me a remnant piece of banding to try, in my last consignment of parts from him.  It was perfect, but not enough for the 5 bands which I require.  So I rang him.  He thought that was the last of his stock of that particular size but he would check and let me know.  Sure enough, he returned the call, and he had found a couple more bits, and they would be just enough.  Old stock, a bit shop-soiled he said.  So I could have it for nothing!

Readers who have been with me for some time will know that I have bought 3 sets of engine castings and plans from EJ Winter.  The Bolton 7 horizontal Mill engine, the Bolton 12 Beam engine, and the Bolton 9 triple expansion engine.  A bit of very interesting news is that Ben is planning a new set of castings for the triple, using the lost wax casting technique, which gives a finish which should require machining on the mating surfaces only.  That sounds so good that I am almost tempted to make another triple.   Almost.   Some months until availability though.  (Hope that you don’t mind my premature announcement Ben.)