Trevithick Dredger Engine. What was the original design?

As I am progressing with building the 1:8 model of the dredger engine, I am experiencing doubts about the authenticity of the design by Tubal Cain 1985, and redrawn by Julius DeWaal 2016.  Those plans are based on the engine in the London Science Museum, which we know was incomplete when found in a scrap yard (?) and reconstructed in 1886.  There are no known or published original plans.

Look at the following photographs.  The first two are boiler components labelled as Trevithick, although incomplete, appear to be unmodified.

The following drawing comes from Rees’s Cyclopaedia, published first in 1819, when many of the engines would have been operating, and given the quality of the drawing, is likely to be fairly accurate.

Finally, the engine in the London Science Museum, which shows some Victorian era features which are highly unlikely to be as Trevithick designed them.

The firebox and firetube, riveted to the end plate.  Note the inspection hatch has no rivet or bolt holes.  How would the hatch have been attached? 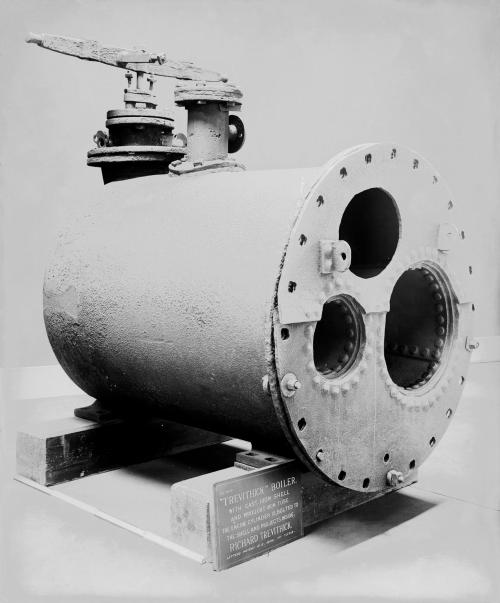 Showing the end plate bolted to the cast iron boiler shell.  Interestingly, the penetrations are mirror image of the LSM engine.  Does anyone know where this boiler is currently located?  And why are there no rivet or bolt holes around the inspection opening?

Drawing from circa 1819.  Note 1. the wooden support at the chimney end of the boiler, 2. the flange for the chimney attaches directly to the end plate, as does the inspection hatch and the firebox door.  None of these protrude beyond the end plate.

This is the best photograph I know of from the reconstructed LSM engine.  There are multiple inconsistencies with the Rees drawings…

The inconsistencies which I note are:

I have not looked closely at the engine details.  No doubt further inconsistencies will be apparent there.

So I am in a bit of a quandry.  Do I make the Cain/deWaal model, removing the obvious inconsistent features but including the dubious ones?  Or do I guess at what Trevithick would have designed, based on the technology which he had available?

Any opinions or thoughts/advice would be welcome.

2 Comments to “Trevithick Dredger Engine. What was the original design?”