If you have been following the build of the model Armstrong cannon, you might remember that most of the steel panels for the carriage were laser cut a few months ago. In the past few days I have been drilling dozens of 2mm holes, ready for final riveting.  Meanwhile the parts are held together with 2mm bolts and nuts.  I expect that the rivets will not be installed until I can see that everything fits and works as it should.

Only a few fasteners so far, but it is surprisingly rigid.

The angle iron is cut from the corners of rectangular section tube with 2mm wall thickness.  It does require some more finishing and rounding off, but the scale is accurate.  The big hole is to allow the hydraulic recoil tube to be inserted.  The recoil cylinder will be 18mm diameter.

SWMBO’s comment….  “It looks like it is made from Meccano”.  I guess that there are a lot of holes.

Meanwhile I have discovered an excellent reference source, published in 1879.  It is a free book, available online at Google Books.  “Treatise on the Construction and Manufacture of Ordnance in the British Service”.  517 pages.  Original price 9 shillings.  It is full of gems for the cannon modeller.  As an example, this is a drawing of the sights on the 64 pounder RML converted to 80 pounder.  You will see that the barrel shape is different from the one which I am modelling, which is a mark 3.  But it is probable that the sights remained the same as those pictured.  A great find, with enough detail for me to scale down and model.

Note that the sight on the right is not vertical, but sloped at approximately 2º.  That is to compensate for the slight deflection of the projectile to the right, caused by the rifling. 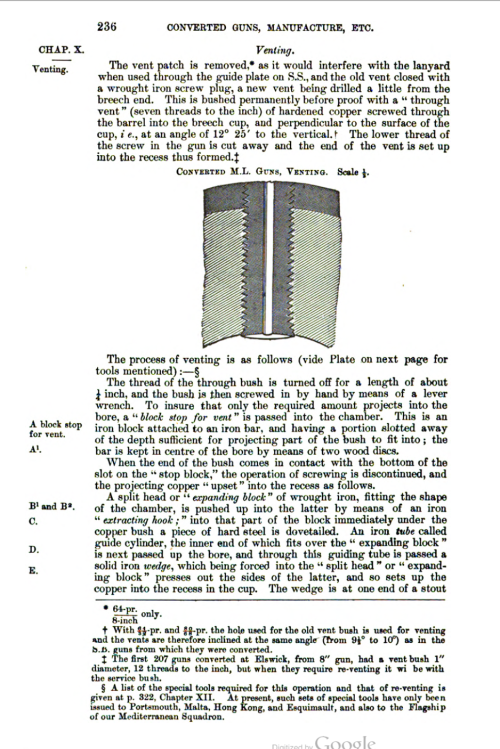 From the same book, a detailed description of the Vent / touch hole / ignition hole.  It was NOT just a simple hole drilled into the barrel, but a copper cylinder which was threaded into the barrel.  The touch hole was drilled through the copper.  The reason for this was that the touch hole gradually became bigger with use, and needed replacement after a certain number of firings.  It also allowed repair of the touch hole if the gun was “spiked” by the opposition, but that was a major exercise which required specialist knowledge and tools, and a return to the factory or one of the 5 workshops listed above.