The OTHER NEXT PROJECT

In the previous post I showed the boiler which I am intending to build.

In this post I will show you the steam engine which I also intend to build when I have AMBSC approval and I have accumulated the materials.  I have discussed the plans with the boiler inspector, and am in the process of redrawing the plans taking into account the required modifications so it can be run at public exhibitions.

It is the TREVITHICK DREDGER ENGINE, at 1 in 8 scale.

This was designed by Richard Trevithick, and made in 1806,   It was the first high pressure steam engine.  It also employed a steam blower, cylindrical boiler, safety valve, and many other innovations.  Incredibly, the engine worked in its first iteration.   Richard Trevithick was indeed a genius, although relatively unrecognised in his own lifetime, and for almost 2 centuries since.

Here is the earliest drawing which I could locate of the dredger engine.

It is from an encyclopedia which was published in 1818. 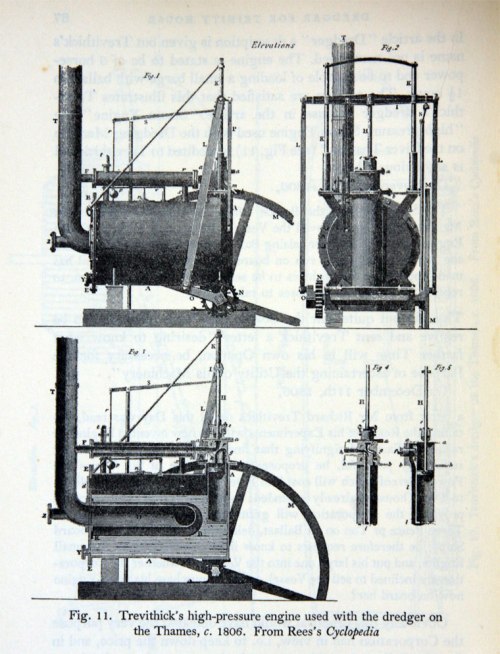 This is a drawing of a Trevithick dredger engine which was reconstructed in 1885, with some errors, including the bent connecting rods..   Of particular interest is the piston-cylinder assembly which is partly encased by the boiler to minimise heat loss. The large, thin, flywheel is a characteristically Trevithick feature.

The Trevithick engine as reconstructed, and as it is displayed in the London Science Museum today.  The blacksmiths who formed the domed boiler end, pentrated by the cylinder assembly must have been incredibly skilled.  (ps.  note added 10/4/19.  The domed end was a casting which included the cylindrical sides, and the flange at the chimney end.  It was not forged by blacksmiths.)

The Trevithick Dredger Engine was drawn at 1:16 scale by Tubal Cain in 1987, and modelled by him. His plans were published in “Model Engineer” magazine.

It was redrawn by Julius Dewaal at 1:8 scale and published on the Internet in 2016.  The plans are currently freely available on Google Images, as 9 pages of A3 plans.  The plans are beautifully drawn, but require some modification to comply with current AMBSC regulations.  I am currently redrawing the Dewaal plans with the necessary modifications.  When they are approved I will detail the modifications.  A 1:8 scale the flywheel is 340mm diameter (13.4″).

A schematic drawing of the engine, as it was reconstructed.

So, watch this space.  Getting the plans finalised and the boiler approved will take some time, as well as gathering the materials.  From my preliminary discussions with the boiler inspector I will need to learn how to braze in bronze, and I will document that process.  Finding a supplier of phosphor bronze in the required sizes is proving difficult, and I might have to settle for the nicer to machine, but weaker, LG2 bronze.  If any reader knows of a supplier of cold rolled phosphor bronze sheet 200mm wide and 6-8mm thick, I would be delighted to hear about it.

4 Comments to “The OTHER NEXT PROJECT”