Fitting the Boiler Feed Pump to the Trevithick Dredger Engine.

The feed pump is attached to the base, and since I had not decided on the final form of the base I had to leave the pump sitting all alone on my messy bench.

But I have now decided to proceed with a wooden base, made of 32x32mm hardwood beams, and a solid wooden top to which the engine and the feed pump are attached.

So today I attached the feed pump.  The engine itself is still just sitting, not attached.  And the bits of the base are still a loose pile of beams of wood, not bolted glued or screwed together.

One minor problem was that there were incomplete dimensions on the plans for the feed pump and its supporting column.   Fair enough.  I assumed that the dimensions would be measured on the job.

First I had to make the steel beam which attaches to the cross head, and the column at the other end, and the pump… 3 attachment points.  I had cut out the beam last week, but it needed a couple of bends.   It was 4mm thick steel, so I did the bending in the workshop press.

Of course one of the bends was too angular, so a bit of cold blacksmithing to flatten it.

And fitted everything to the engine sitting on the base. 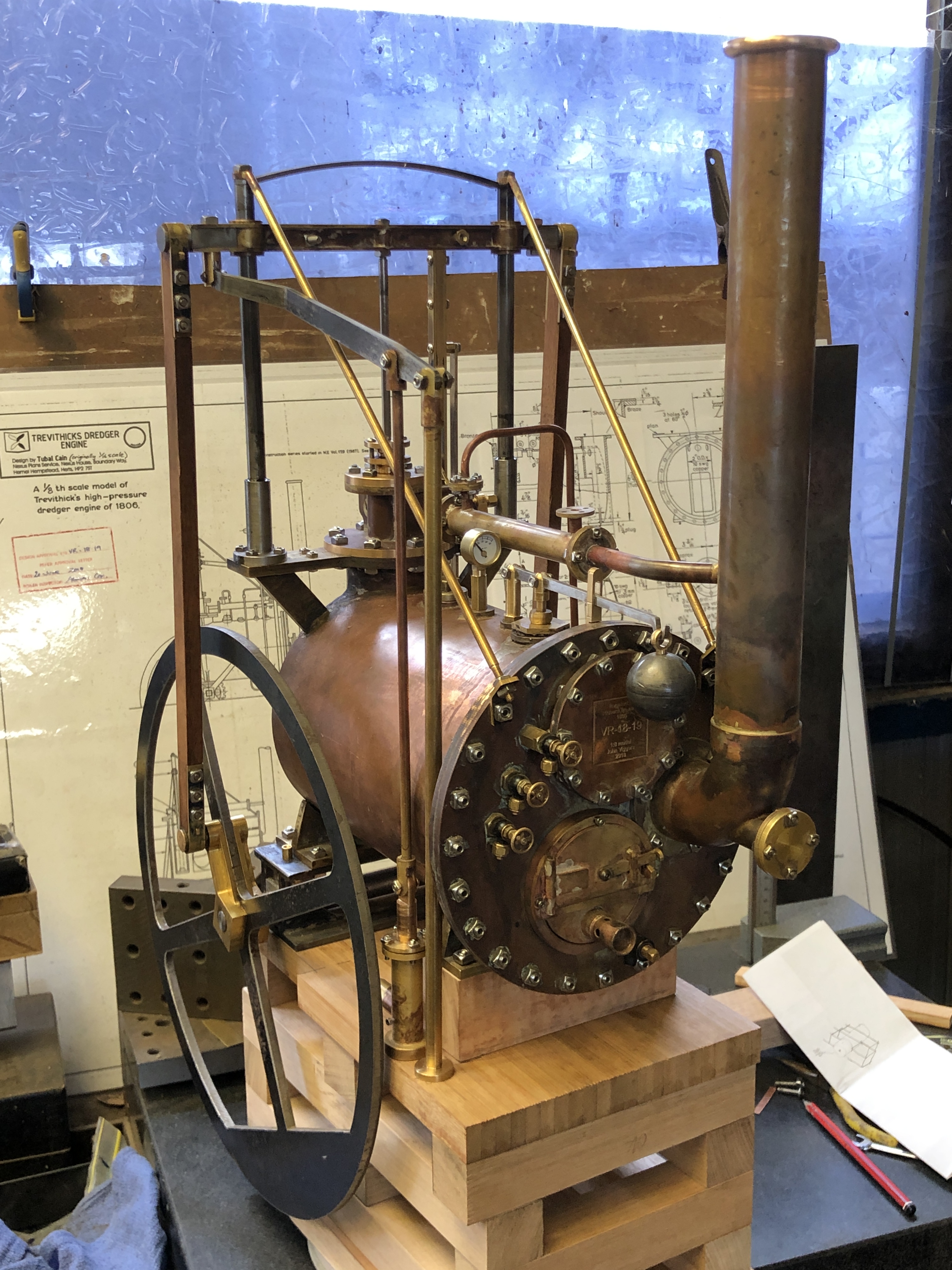 The holes which were drilled in the top of the base were a bit of a guess, because the distance between them was not on the plans.  I drilled them 28mm apart, but it was clear after assembly that they were too close together.

Then the penny dropped.  The holes in the base should be the same as the corresponding holes in the steel beam… 32mm.  so I filled one of the holes with epoxy filler, redrilled it, re-tapped it and reassembled everything.

The re-drilled hole and filler are hidden beneath the feed pump.  The space in front of the boiler face is now occupied by gas piping and a gas control knob.  Not quite finished so no pics yet.  Notice the boiler pressure gauge on top of the boiler.  Not as per R Trevithick, because the Bourdon tube type pressure gauge was not invented until 1849, but it is required for boiler certification.   Maybe I will label this as a model of a Trevithick engine which was updated in 1850.

Next to make the pipe between the feed pump and the boiler feed pre-heater, and a bypass tube with valve.   I have not decided on the size or form of the water supply tank. A riveted squarish tank, or even a riveted cylinder would be nice.   Probably make do with a plastic bottle for the time being.

I also need to fasten together those base beams.  Have still not decided how to do that.

There are 4 types of wood in the base.  I might have mentioned one or two of them.  One is the top, one is the beam under the front of the boiler, the base beams is another, and there is a sizeable block underneath everything.  I doubt that anyone will be able to identify all of the wood types.  2 are Australian, one is European, and one is Asian (I cut up a breadboard for that one).

And thinking about a colour scheme.  Flat black is the favoured colour in most other models, but I want to include some Georgian reds blues greens or yellows.  And leave a bit of brass and copper for polishing.

Oh, and I made a ring for the top of the chimney.  Seen in the second pic.