How were Trunnions Joined to 1866 Barrels? Correction of a previous post.

The earliest cast cannon barrels were cast in one piece, and the trunnions were included in the casting.

By 1866 however, large barrels were made from 4 or more separate pieces, which were heat shrunk together, and additionally forge welded together.

The following information comes from “Naval Gunnery” by Captain H. Garbett, published in 1897. 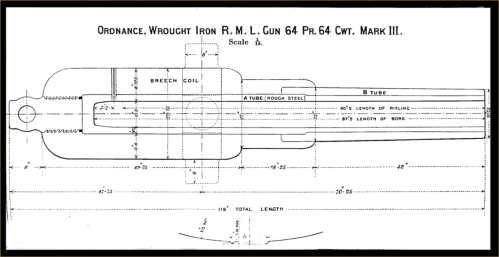 The diagram is of a 64lb Armstrong rifled muzzle loader.  The 80 lb muzzle loader, which I am modelling, was very similar to, and based on the 64lb gun, except that the diameters of the sections were larger, giving greater wall thickness.

The “A” tube, containing the bore,  was made from best quality forged steel, in one piece, although earlier models used the “coil” method described below, and earlier than that it was wrought iron.  It was permanently closed at the breech, but in slightly later models it was open, sealed with a copper disk which was held against the cascabel.  The A tube was bored and rifled after assembly of all of the barrel pieces.

The “B” tube, or tapered chase was heat shrunk onto the “A” tube.  It was a coil construction. (see below).

The “Breech Coil” had 3 components, plus a cascable which screwed into place with a deep, asymmetric thread.  One of the components was the “trunnion ring”, which was welded to, and separated the other 2 components.

When steel is forged into a strip, apparently it is strongest along its length due to the orientation of the crystalline structure.   It was discovered that the strongest cannon barrels were made from long strips of forged iron or steel (up to 200 feet long), which were then wound around a mandrel, while red hot, forming a cylinder.  The red hot coil was then hammer welded into a solid cylindrical mass, with most of the steel crystals aligned circumferentially.  It was then machined into its final shape, with allowance for final heat shrinkage onto its mates.

The trunnion ring was forged from a single billet of steel.  Two holes were punched through the red hot billet, expanding the sides.  Further hammering shaped the trunnions from the lateral expansions.  The final shape was then machined.

The three breech pieces were forge welded together, and heat shrunk onto the “A” tube and the “B” tube.  I could not discover the construction sequence of welding/shrinking these components.

This post is to correct an earlier post about the trunnions in the Armstrong cannon  construction, in which I stated that the trunnions were heat shrunk into the barrel.  The incorrect implication was that the trunnions were heat shrunk into holes in the barrel sides.  My recent reading indicated that the “trunnion holes” method, which I used in my model, was NOT the method used in 1866.  I am not losing sleep over this lack of authenticity in construction of my model.  One of many compromises which are made when scale modelling.