A Chuck in a Chuck

Sometimes, the chuck in your lathe is too big.

I needed to machine some of the aluminium castings which I had made for the cannon chassis.  They were too high by 1-2mm.  But, the flanges were delicate and thin walled, and although the ends were flat and roughly parallel, they were not actually parallel.  I wanted to use my most rigid and precise lathe, which is the Colchester Master 2500.  But the bore on the chuck was greater than the diameter of the part which I was turning.

So this is the setup.  A chuck in a chuck.

The Colchester 3 jaw is 200mm diameter, and it neatly holds a 80mm chuck off my Boxford TCL125 CNC lathe, which holds the part.  It is a centre column from the scale model Armstrong gun which I am currently assembling/making.   It is a bit irregular, with thin 2mm flanges and fins.  I really did not want to damage it, but it needed 1-2mm trimmed from its height.

So, I held the part in the 80mm 3 jaw, centre drilled it, and supported it in the 3 jaw and the tailstock.  It worked well.  No disasters. 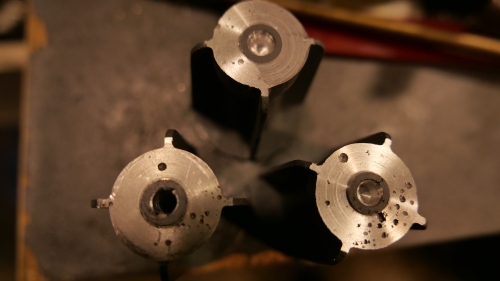 I machined the three castings which I had made.  And reversed them to machine the bases.   The setup worked well.   I need only 2 of these, and could use any of them.  The machining did reveal some porosity of the castings, but overall I am quite pleased with the end result.

p.s.  You might notice some advertisements in my posts from now on.  Unfortunately I am at my storage limit on my current WordPress plan, despite deleting virtually all embedded videos, and placing the main ones on YouTube.  I am facing the prospect of either deleting old posts, or increasing my WordPress payment plan to a business plan, which is substantially more expensive.  I have decided to see if monetising the site will cover the cost of upgrading to a business plan.  I do hope that the ads will not be too intrusive.  Let me know what you think.