When I looked closely at the rifling cutters which I had lasered out of a broken Brobo saw blade, I realised that I had boobooed.  I had measured the thickness of the blade at 2.5mm, which was actually a bit thinner than I wanted, but would have been acceptable. But when I measured the cutters, they were only 2.2mm thick.   Reason?  The saw blade had been hollow ground, and the blade inside the teeth was thinner.   Too thin, I decided.

So after some wailing and teeth gnashing I have ordered some 3mm thick tool steel in the form of planer blades, which I am pretty sure will not be hollow ground, and I will ask the laser cutter to cut me some more blades.  So waiting waiting.

And I am setting up the cannon barrel for rifling.  The CNC rotary table (stepper motor hidden behind) will be bolted to the CNC mill table.  The barrel is held in the jig which is held by the mill quill.  The cutter, (not seen in this photo) will be drawn out of the barrel by the mill X axis, while being rotated in the A axis by the rotary table.   That is the plan anyway.  But still waiting for bits to arrive so I can finish the cutting tool. 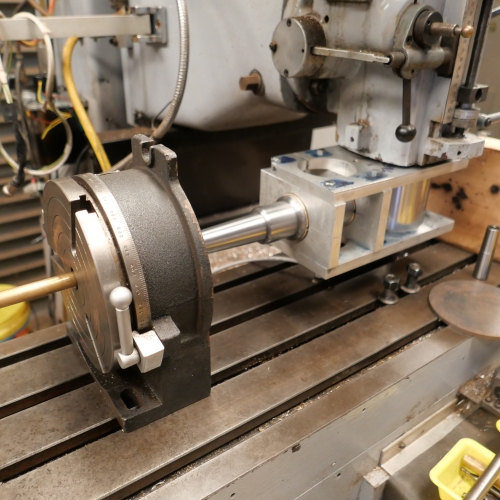 The Armstrong cannon barrel held to the mill quill, and the rifling cutter will be held by the CNC rotary table.

The rifling tool which I will not be using because the cutter is too narrow.  The cutting edge just peeping out of the slot will be dragged and twisted through the barrel bore.  The cap screw adjusts the degree of protrusion.

Meanwhile, I am accumulating various bits of gear to do some bronze casting.   An electric furnace with graphite crucible from China, Some jewellery investment material for the moulds, and a second hand pottery kiln for preparation of the moulds, and melting out the PLA 3D printed parts.   I will take some photos when it is all here.

And SWMBO has conscripted me to assemble and install some kitchen cupboards for a property which she is renovating.

These are flat pack units.  Kaboodle.  Well designed and CNC cut and predrilled.  Not quite finished.  Waiting for the stone bench tops to be made and installed, and for appliances to be wired and plumbed.  Frankly I would prefer to be tidying up my workshop, but hopefully I am gaining some “Brownie Points”.