I would have preferred that the title of this blog was “Finishing the Ottoman Bombard”, but I am still waiting for the vectors of the barrel mouth decorations and Arabic (?) writing, and the touch hole.

But I have at least painted the bombard, and the pictures follow.  You will notice that I have not attempted to reproduce the bronze or copper colours of the orginal in Fort Nelson.  Partly because I doubted my ability to make painting such variegated patterns realistic, and partly because the cannon would not have looked like that in its heyday of 1464.  It would probably have been either black, like most SBML cannons (smooth bore muzzle loading), or possibly gaudy golds and reds and blues like other medieval items.  So I painted it black.  I like it.  If I get evidence that it should be more colourful I can change it later.

Next coat – matt black brushed on, to fill the hairline wood cracks.  Incidentally, the (dirty) parquetry floor is also made from the red gum house stumps from which the cannon is made.

final two coats –  matt black, from a spray can.

So there it is, finished except for the barrel mouth engraving, and the touch hole.  Now what to do with it…   SWMBO says it might be useful as an umbrella stand. 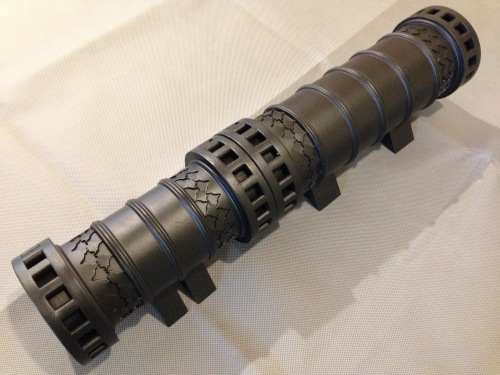 It does need some decoration